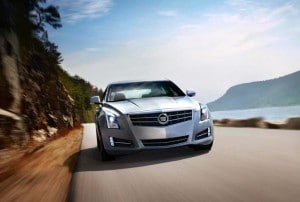 Cadillac will up the performance quotient of the ATS sedan and coupe models with a new V-Series.

True, it might be lifting another maker’s tagline, but Cadillac will be going “vroom, vroom,” when it rolls into the Los Angeles Auto Show a couple weeks from now.

General Motors’ once-dominant luxury brand is planning a massive expansion of its product line-up over the next few years, and it will start bottom to top with the roll-out of the all-new ATS-V, the maker has confirmed. It’s the first high-performance version of the compact sedan and coupe models, and the first V-Series addition in some years.

The debut will be equally significant if, as expected, the top-secret powertrain that will be used in the new ATS-V proves to be a twin-turbo V-6. That would mark the first time Caddy’s V-Series line shifts away from the classic V-8s that it has traditionally relied on.

A V-Series take on the latest-generation Cadillac CTS model is also in the works, set to debut early next year, and it is expected to stick with a classic eight-banger.

Various insiders have told TheDetroitBureau.com that there was plenty of internal debate over the powertrain strategy for the new ATS-V. But considering the compact nameplate is designed to challenge the best European entry-lux models – notably BMW’s 3-Series, it’s no surprise that a more compact, high-tech powertrain strategy won out.

Indeed, BMW itself has been moving in that direction. The M3 sedan and the near-twin M4 coupe are both powered by a new TwinPower 3.0-liter inline-six engine that now makes 425 horsepower and a searing 406 pound-feet of torque. That engine can be paired with either a 6-speed manual gearbox or a 7-speed double-clutch transmission.

That approach pays off in terms of not only power, but also fuel economy, the 2015 Bavarian models seeing a nearly 25% increase in mileage while delivering 0 to 60 times of just under 4 seconds with the DCT gearbox.

Cadillac isn’t releasing specific details about the ATS-V, though it is expected to use an up-rated version of the current Cadillac twin-turbo 3.6-liter V-6 which is producing up to 430-horsepower in current trim. Don’t be surprised to see it top the M3, perhaps reaching somewhere around 450-hp, which would be roughly in line with what the big 6.2-liter V-8 is now making in the Corvette Stingray.

The ATS could certainly use a little boost – whether from a turbocharger or natural aspiration. The compact model has been extremely well-received by the automotive media, but not by the buying public. Sales have lagged well behind expectations, meaning Cadillac is one of the few luxury brands to lag the industry’s overall recovery this year.

(How did Cadillac – and its competitors – fare in the latest Consumer Reports Reliability Study? Click Here to find out.)

Cadillac’s V-Series has been positioned to put a halo around the Detroit brand, much as BMW has done with the M line, and Mercedes-Benz has done with its AMG models. They aren’t expected to generate significant sales volumes but, rather, to draw potential customers inttheo showrooms for other models in the line-up.

As for the next-gen CTS-V, it is expected to have the more traditional V-8 under the hood when it makes its debut, likely at the Detroit Auto Show in January. It is expected to pack significantly more of a punch than the current version which churns out 556-hp from its supercharged 6.2-liter engine – enough to hit 60 in 3.9 seconds. It would need more power to maintain that number because the new CTS itself is bigger than the old sedan.

While Cadillac – like GM, on the whole – isn’t walking away from V-8 power, don’t be surprised to see the luxury maker and its parent put more emphasis on turbocharging and supercharging in the years ahead, perhaps even opting for battery-based boost systems – something that even rival Ford is considering for a future version of the Mustang.

The challenge will be to keep up the performance quotient while also delivering the fuel economy buyers expect – and new federal rules will mandate.

(Lincoln getting as much as $5 billion to rebuild the brand. Click Here for more.)