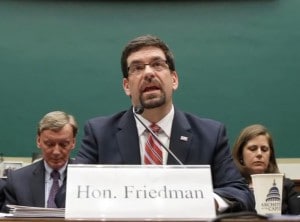 U.S. Senators took turns lambasting the head of the National Highway Traffic Safety Administration during a subcommittee hearing for failing to discover sooner the problem with General Motors faulty ignition switch that is cause of 19 deaths and the recall of 2.6 million vehicles.

Senator Claire McCaskill, who chaired Tuesday’s hearing, blasted the agency for not doing more to get to the bottom of the problem by exercising its powers, including subpoenas, to do so.

“That reflects obviously on an agency that is perhaps more interested in singing kumbaya with the manufacturers than being a cop on the beat,” she said.

David Friedman, NHTSA’s acting administrator, defending the agencies efforts, repeatedly laid the blame for the problem at GM’s feet during.

Friedman often deflected the criticism from senators during questioning and noted that the agency is understaffed and underfunded, but also suggested the agency was changing its processes and procedures to improve its performance as a result of the GM issue. He pointed out that the agency has instituted about 1,300 recalls involving more than 95 million vehicles in the last 10 years.

He also declined to apologize to the families involved the most recent GM recall on multiple occasions. The rough-and-tumble hearing, during which several senators called on the Obama Administration to appoint a permanent leader of the agency, came on the heels of a report released by Republicans in the House Energy and Commerce subcommittee on Oversight and Investigation that excoriated NHTSA’s handling of the problem.

The report suggests that after NHTSA decided not to open an investigation into air bag failures in GM’s small cars in 2007, it was unwilling to examine that decision even though more reports about the problem were brought to the agency’s attention.

(Click Here for details about why the death toll due to GM’s faulty ignitions rose to 19.)

Perhaps most importantly, the report claims that the agency did not know how an airbag worked thus was unable to do its job.

“As vehicle functions and safety systems become increasingly complex and interconnected, NHTSA needs to keep pace with these rapid advancements in technology,” the report said. “As evidenced by the GM recall, this may be a greater challenge than even NHTSA understands.”

(To see more about the new Bentley Mulsanne, Click Here.)

The report pointed out that a police officer investigating an accident discovered the problem and forwarded the information to NHTSA in 2007, and the agency commissioned two outside firms to conduct investigations of that accident and another and those findings supported the officer’s conclusion that the ignition was the cause.

Despite having this information, the agency relied on larger data that suggested GM’s airbag failure rates weren’t substantially different than all automakers thus it didn’t warrant further investigation.