Fiat and Mitsubishi Teaming Up on New Midsize Pickup

Is a new alliance between Mitsubishi and Chrysler in the cards? 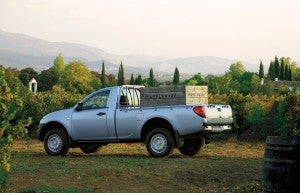 Fiat and Mitsubishi entered into an agreement for the Japanese maker to provide Fiat with midsize trucks in Europe and Latin America.

The Fiat side of newly merged Fiat Chrysler Automobiles has signed a tentative agreement to purchase a midsize pickup truck plant from Mitsubishi for re-sale by its commercial vehicle unit in Europe and Latin America.

The project raises new questions about whether the U.S. side of the company might get back into the midsize segment it abandoned several years ago. If so, it could signal a rebirth of the long-running relationship between Chrysler and Mitsubishi

As part of the Memoradum of Understanding, or MOU, Fiat and Mitsubishi will study “the possibility to develop and manufacture a midsize pick-up truck,” the two companies said in a joint statement, based on the Japanese maker’s L200 model.

Details were scarce, but Mitsubishi currently builds pickup trucks in Thailand, as do competitors Ford, General Motors, Toyota, Nissan and Isuzu. Mitsubishi is looking for ways to increase the utilization of the plant, analysts told Reuters after the Fiat-Mitsubishi deal was announced.

Midsize pickups are popular in rural areas throughout the world since full-size, American-style trucks are considered too large and too expensive. They were also quite popular in the U.S. through the 1980s before full-size models began to gain momentum. Today, large models like the Ford F-150, Chevrolet Silverado and Ram 1500 outsell midsize offerings in the U.S. by almost 10-to-one.

That led all three Detroit makers to pull out of the segment, leaving it to Asian rivals Toyota and Nissan.

Chrysler had signaled it might make a return, but Reid Bigland, president of the Chrysler Group’s Ram brand, said earlier this year the business case for a midsize pick-up is a “close call,” one that doesn’t appear to support the required investment.

Despite developing a well-reviewed new version of its own midsize Ranger model, Ford Motor Co. has so far elected not to bring a version to the U.S. It has cited the challenges of producing the vehicle in the U.S. as a major problem, while import restrictions – the so-called “Chicken Tax” – would make it too expensive to import.

But some industry planners are starting to rethink such opposition.

Even though it only began shipping its new Chevrolet Colorado and GMC Sierra models to dealers this week, General Motors says it has already received 30,000 preliminary orders, significantly more than it originally anticipated. Mark Reuss, the GM executive in charge of global product development, said there is a potentially huge, untapped market for a smaller pickup truck, particularly on the West Coast.

The maker is going so far as to add a third shift at its assembly plant in Wentzville, Mo. to meet that apparent demand. Only two years, GM had permanently closed a truck plant in Shreveport, La. that built the earlier versions of the Colorado and Canyon because sales of midsize pickup had dropped as hefty incentives helped shift buyers over to the full-size segment.

Since then, incentives on full-sized trucks have leveled off and transaction prices have climbed as Chevrolet, GMC, Ram and Ford have all introduced more fuel-efficient models.

While it’s too early to see if Fiat Chrysler will add an American version of the Mitsubishi truck, the new deal could revive a decades-long relationship between the U.S. and Japanese maker – which came close to merging on several occasions.

During the 1970s, Mitsubishi provided its American ally with a wide range of small cars, such as the old Plymouth Arrow. The relationship continued even after Chrysler joined Germany’s Daimler AG in a so-called “merger of equals.” But things fell apart with the poor performance of a program that led to a new line of products including the final-generation Chrysler Sebring.

(To see where FCA and Hyundai are dropping big money to put their new homes, Click Here.)

Since then, Mitsubishi has struggled for survival while Chrysler went through bankruptcy and rebirth, teaming up with Fiat. It remains to be seen if the Fiat-Mitsubishi MOU might lead to an even broader, three-way alliance.