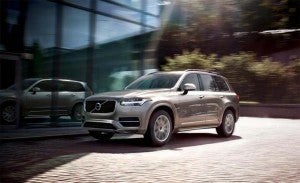 It’s been 13 years since Volvo last updated its big XC90 SUV, an interminable wait in an industry where customers are demanding faster and faster product updates.

The maker this week finally rolled out a new version of the XC90, which will reach showrooms around the world next April. The big ute is the first all-new model developed under the ownership of Zhejiang Geely Holdings, the Chinese carmaker that purchased Volvo from Ford Motor Co. in 2010 – but it won’t be the last.

Volvo is planning to introduce at least nine all-new models between now and 2019, company officials announced during interviews that followed this week’s preview of the XC90. The focus will be on the XC family of utility vehicles, more traditional wagons, and sedans, those officials stressed. But they also hinted that more products, targeting specialty niches, could follow.

The new models will be critical if Volvo hopes to even come close to its ambitious sales goals. The Swedish maker saw demand collapse in its final years as a Ford subsidiary, and only began to recover in the last several years. Demand peaked at 458,000 in 2007, and rebounded to 428,000 in 2013. The maker is currently tracking about 10% ahead of that figure this year. But by 2020, it is aiming to sell a full 800,000 vehicles worldwide.

Volvo and parent Geely are investing $11 billion in that mission. And while it has spent a sizable sum on two new factories in China, the bulk of that cash is going into the development of both new powertrains and the vehicles that will use them.

(Click Here for more on Volvo’s radical new powertrain strategy, which will focus on 3- and 4-cylinder engines and a pair of plug-in hybrids.)

The XC90 will be the biggest model in the future Volvo family. There are no plans for any direct challenger to the likes of the Mercedes-Benz S-Class or BMW 7-Series, stressed CEO Hakan Samuelsson, though there will be a new S90, as well.

Both the XC90 and S90, as well as XC60 and S60 models, and a new V50, will be based off the all-new SPA “architecture,” a highly flexible vehicle platform that was developed by Volvo since spinning off from Ford.

(Click Here for details on Toyota’s $32.5 million expansion of it Michigan-based technical center.)

The maker is also developing a smaller architecture, dubbed CMA, for future products like the next 40-series family. This platform is being jointly developed by Volvo and Geely, and is the most ambitious joint effort since the Chinese maker purchased Volvo. But Swedish officials repeatedly stressed that any products they jointly develop will be limited to the small C-segment made up of vehicles such as Volvo’s C40 coupe.

That said, the Swedish maker’s current product program actually does not include any coupes or convertibles. The decision has been made to focus on vehicles aimed at high-volume segments, such as XC90 and smaller XC70, explained product strategy chief Lex Kerssemakers.

“We have to focus the brand on cars…that cover the main segments that represent 60% to 80% of all luxury sales,” he explained, adding that even with the support of Geely, “There is a limit. You have to pick and choose.”

That’s not to say that coupes, cabriolets and other niche products won’t follow. Kerssemakers and other officials noted that Volvo’s two new architectures will have the flexibility to serve as foundations for all sorts of niche vehicles, and Volvo will reevaluate its opportunities as the core of its line-up falls into place.

(To see why the Ram diesel and the Toyota Highlander hybrid were lauded Consumers Reports, Click Here.)

The product blitz will come in two phases. The larger of Volvo’s new models will roll out first, using the new SPA architecture. The CMA platform, however, is still a work in progress, and “We will roll this out in about four years,” noted Volvo Cars President and CEO Hakan Samuelsson.

So there is time to reconsider what it needs as the decade rolls on. And that very well could depend on the public response to the new XC90, said IHS analyst Ian Fletcher.

“It remains to be seen whether consumers respond to the brand’s new direction,” he wrote in a report on the new ute’s launch. “If it is successful, it could bode well for its further new launches in the future.”