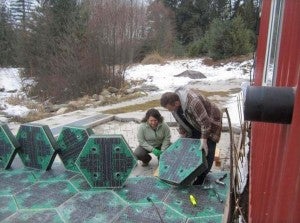 Julie and Scott Brusaw lay down the solar pavers for the prototype driveway they've built.

Step onto the pavement on a hot day and you might get a sense of the energy that Scott and Julie Brusaw hope to tap into.

The Idaho couple hope to pave the country’s roadways with solar cells, rather than asphalt or concrete. It’s an admittedly edgy idea that the Idaho entrepreneurs nonetheless believe could replace much of the need for traditional sources of generating electricity in the U.S., including coal-fired power plants. And, apparently, a lot of folks like their idea, helping the Brusaws raise a record $1.5 million in preliminary funding through the Indiegogo.com crowdsourcing site.

But they aren’t the only ones who believe roadways could also become energy sources. Volvo is working with the Swedish Transport Association to turn a stretch of roadway in the City of Gothenburg into a rolling battery charger that will be used by specially equipped electric buses. The concept might someday help eliminate the so-called range anxiety electric vehicle owners suffer due to the limited storage capacity of today’s batteries.

“Years ago, when the phrase ‘Global Warming’ began gaining popularity, we started batting around the idea of replacing asphalt and concrete surfaces with solar panels that could be driven upon,” the Brusaws note on their website to explain their idea.

As one might imagine, translating that into a practical solution hasn’t been easy. You can’t simply take solar cells off of a rooftop and bury them into the pavement. Scott, who was trained as an electrical engineer, has come up with a hexagonal block that contains a solar cell protected by a thick glass cover. Add LEDs and there would be no need to paint lines or messages on the roadway. Small heating elements could also be installed in Snowbelt climes.

Laid out like pavers, he contends they are strong enough to support a truck weighing as much as 250,000, more than enough for virtually the largest oversized load any road in the country might have to cope with.

And the point is that there are plenty of roads, add them all up and they cover an estimated 29,000 square miles of the U.S. landscape. That’s enough, the two claim, that if all were converted to the solar pavement system, there’d be enough power to eliminate the use of fossil fuel generators.

That said, engineer Scott admits the technology wouldn’t be cheap, estimates running anywhere from 50% to 300% more than for using asphalt to pave a roadway.

And how the material would stand up to weather, road salt in colder climates, snowplows, crashes and other challenges remains to be seen.

But the Brusaws hope to address some of those issues now that they have set up a pilot parking lot to demonstrate the capability of their system, Julie recently announcing that, “Finally, we’ve gone from concept to a tangible prototype.”

(Click Here for more about critics’ claims that the number of deaths due to GM’s faulty ignition switch exceeds 50 people.)

While there are plenty of skeptics, the Brusaws also have been gaining backers. They’ve generated several grants from the Federal Highway Administration, including one for $750,000 in 2011.

They’ve since turned to the Indiegogo crowdsourcing site for more support, and the reception has exceeded their $1 million goal substantially. As of Thursday, Solar Roadways had already pulled in $1.5 million from 36,000 supporters, a record for the most individual contributions to a single campaign.

While the Brusaws want to use roads to generate electricity, others see a way to provide electric power through the roads to power battery vehicles. That could be a major breakthrough for proponents of alternative energy, offering a way to overcome the limitations of battery-based vehicles.

Volvo is pairing up with the Swedish Transport Association to create short stretches of electrified roadway in Gothenberg, the Scandinavian country’s second-largest city. Using a concept called inductive charging – essentially what’s used to wirelessly charge many electric razors and toothbrushes — specially designed city buses would simply have to drive along dedicated portions of pavement to partially replenish their batteries.

And because there are no exposed wires, the system would be safe for humans and animals who might inadvertently walk across the chargers.

“Vehicles capable of being charged directly from the road during operation could become the next pioneering step in the development towards reduced environmental impact,” said Niklas Gustavsson, executive vice president of Corporate Sustainability for the Volvo Group.

Other induction charging systems have been put to use in several locations, including Utah, Torino, Italy, and Gumi, South Korea, with more under study. Longer-term, proponents believe the technology could be incorporated into highways for use by electric passenger cars such as the Nissan Leaf and Tesla Model S – perhaps built into existing HOV lanes or dedicated lanes for use by battery cars only.

Right now, such induction charging systems have to be linked to the conventional electric power grid. But the Brusaws have suggested that they could combine in-road chargers with their solar roadways, eventually allowing highways to both generate power and use that energy to operate a fleet of zero-emissions cars, trucks and buses.