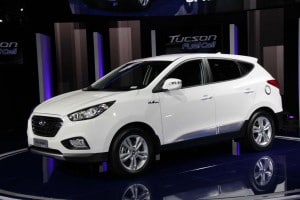 Hyundai will bring its Tucson-based hydrogen fuel-cell vehicle to market later this year.

While California is generally seen as the land of “green” experiments, the state is putting its money where its mouth is with the installation of dozens of new hydrogen fueling stations across the state.

The California Energy Commission is investing $46.6 million to accelerate the development of hydrogen fueling stations. The cash infusion will add 28 new stations to the existing nine stations. There are another 17 sites in various stages of development, which would bring the total stations expected online in the next couple of years to 54. That commission’s goal is 100 stations.

The debate over the viability of hydrogen-powered vehicles typically has been a chicken-or-the-egg style debate. Automakers have not pushed the development of the vehicles because there is no infrastructure in place to refuel the vehicles. Of course, the hydrogen fuel providers have countered they don’t want to invest in pricey new stations when there aren’t vehicles using them. 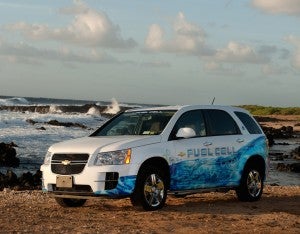 With the aforementioned stations and several new offerings from automakers, it would seem both sides are moving off their positions. While Honda’s FCV has been rolling around the streets of southern California for more than five years now, it’s getting some company.

At the L.A. Auto Show last November Hyundai said it wants to begin limited sales of a fuel cell-powered Tucson crossover. To increase demand, it announced plans to lease the vehicle for a flat $499 a month, which includes all the hydrogen a motorist might need.

Honda jumped in to the fray late last year as well, with the unveiling of its FCEV fuel-cell vehicle concept car – the maker promising to put a final version into production by 2015.

General Motors has been testing a fleet of 119 fuel cell Chevrolet Equinox crossovers in California. The fleet has more than 3 million miles of hydrogen-powered driving, according to the automaker.

“Hydrogen fuel cell technology is an important part of GM’s advanced propulsion portfolio and we continue to make substantial progress in furthering this technology,” says Charlie Freese, executive director of GM’s global fuel cell engineering activities, in a statement. “These vehicles have operated through seven full winters and a wide range of environmental conditions, proving that fuel cells can meet the demands of real-world drivers.” 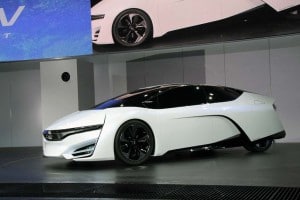 Honda's FCEV is a reminder of the maker's dedication to hydrogen fuel cells.

The companies are also working together with stakeholders to further advance refueling infrastructure, which is critical for the long-term viability and consumer acceptance of fuel cell vehicles.