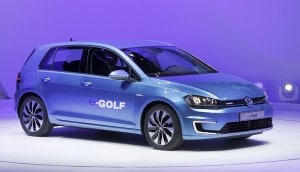 VW will launch the e-Golf and an assortment of other battery-based vehicles in China.

With Beijing’s traffic choked roads as a backdrop, Volkswagen announced a major initiative to put tens, perhaps 100s of thousands of electric vehicles on the road in China before the end of the current decade.

VW chief executive officer Martin Winterkorn said VW and its key Chinese partners were prepared to spend as much as $27 billion in the next five years on electric vehicles in China.

“The Volkswagen Group is once again assuming a pioneering role in China and launching the biggest initiative for e-mobility in China’s automotive history”, s said. Martin Winterkorn,

The initiative gets underway with the launch this year of the Volkswagen brand’s electric Up! and e-Golf models in China.

While the Porsche Panamera S E-hybrid is already in showrooms in China, the VW Group will be launching two further plug-in hybrid vehicles there next year with the Audi A3 e-tron and the Golf GTE.

Winterkorn said the initial steps will be followed in 2016 by two models developed especially for the Chinese market: the Audi A6 and a new midsize sedan from the Volkswagen brand, both plug-in hybrids being developed together with joint venture partners FAW Volkswagen and Shanghai Volkswagen. They  will both be produced in China.

The VW Group also showed off a Bentley Hybrid Concept during a Beijing Auto Show preview. The ultra-luxury maker has already announced plans to produce a plug-in hybrid version of its planned SUV.

(Chevrolet makes Trax as it Cruzes into Beijing. Click Here to check out both new models.)

The Chinese government has told automakers it would like to see as many as 5 million EVs on the road in China by 2020 and VW is just one of many carmakers showing off electric vehicles at the 2014 Beijing International Automobile Exposition.

The pressure from the Chinese government, which is hoping to reduce the worsening air pollution blanketing cities such as Beijing, is pushing the industry to go electric as rapidly as possible. Volkswagen’s German rivals, Mercedes-Benz and BMW, are also making major investments in EVs in China, as are General Motors and Nissan.

Winterkorn noted all of the vehicles being offered by VW Group’s constituent companies are highly efficient and eco-friendly.

“At the same time they offer lots of driving pleasure. That is exactly what people all over the world, and here in China, expect. Thanks to the modular strategy, which is also being implemented at our Chinese factories, we can electrify nearly every model in our range: From small cars to large sedans, from pure electric drives to plug-in hybrids,” Winterkorn said.

A total of 17 models from various VW brands already meet the updated legal requirements set by Chinese authorities to qualify as “especially energy-efficient vehicles.” That provides more than just bragging rights.  In some cities, such as Beijing, that means such products aren’t limited by new registration restrictions that have slowed sales of more conventional vehicles.

VW and its two joint venture partners, FAW Volkswagen and Shanghai Volkswagen, already employ over 2,700 engineers in China, many of them dedicated to EV development.  Meanwhile, the maker plans to add more than 20,000 new skilled jobs in China over the coming years as it attempts to shore up its position as the market’s sales leader.

In addition, VW’s dealer network will grow by 50% from roughly 2,400 dealerships to over 3,600 sales “partners,” company officials said.

For 2014, noted Winterkorn, VW is aiming for double-digit growth in China that could yield sales of over 3.5 million vehicles for the first time in a calendar year.  That would give a significant push for the maker’s ambitious goal of selling 10 million vehicles around the world this year.