Toyota Confirms Plans to Move US HQ to Texas 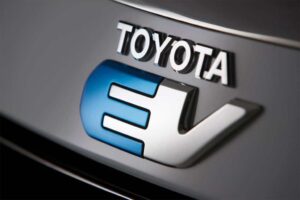 Toyota has had its U.S. headquarters operation based in California since 1957.

Toyota has confirmed plans to move its U.S. headquarters from the Los Angeles suburbs to a new complex it will build in the Dallas suburb of Plano. It also plans to significantly expand its technical center in the Detroit suburb of Ann Arbor.

All told, about 4,000 current employees will be impacted by the move from California and a separate facility in Kentucky – the announcement coming just days before a corporate restructuring was set to take effect. It remains to be seen how many of those employees will actually make the move when the Japanese giant relocates its U.S. manufacturing, sales and marketing, financial services and corporate operations.

The maker says that by combining those operations under one roof, if will be in a position “to better serve customers and position Toyota for sustainable, long-term growth.” But according to reports that had begun leaking out prior to the company’s official announcement, the automaker also wants to slash its expenses and get out from under California’s strict regulatory environment.

“With our major North American business affiliates and leaders together in one location for the first time, we will be better equipped to speed decision making, share best practices, and leverage the combined strength of our employees,” said Jim Lentz, who was named Toyota’s first chief executive for the North American region last year.

(Toyota delivers major redesign of Camry for 2015. Click Here to check it out.) 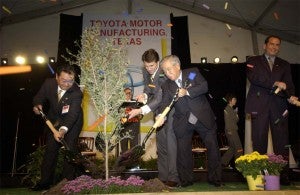 The 2003 groundbreaking at Toyota's San Antonio plant which produces both Tacoma and Tundra trucks.

Toyota first set up shop in California in 1957, but has expanded rapidly – and at times in piecemeal fashion – in recent years as it has grown from a small importer to one of the largest manufacturers in the U.S. automotive market.

Calling the move the “most significant change” for Toyota’s North American operations in 50 years, Lentz said that the move ultimately will enable “greater collaboration and efficiencies across Toyota will help us become a more dynamic, innovative and successful organization in North America.”

Toyota plans to phase in the move to Texas, starting with “small groups this summer.” But it doesn’t expect to move the bulk of its California workforce to the Lone Star State until a new “environmentally-sustainable campus facility” is completed in late 2016 or early 2017. The last group to move will be its Toyota Financial Services lending arm, in 2017. That group employs about 1,000.

Toyota’s announcement comes eight years after rival Nissan Motor Co. revealed plans to move its own U.S. headquarters to Franklin, Tennessee, a fast-growing suburb of Nashville. That move was part of a cost-cutting effort by CEO Carlos Ghosn who also shifted the maker’s global HQ from a high-rise in Tokyo’s tony, but expensive, Ginza district to the less glamorous sister city of Yokohama.

Such a move can create challenges, however. Nissan wound up with only 42% of its California employees transferring to the new Nashville location. That wasn’t entirely unintentional, according to company insiders who said it offered the maker a chance to shake up its workforce. But some top managers decided to retire or find alternative work rather than leave California at the time.

While the bulk of the jobs moving to Texas will be pulled from California, another 1,000 employees will be affected at the maker’s engineering and manufacturing center in Erlanger, Kentucky.

The automaker also plans to expand its Toyota Technical Center near Ann Arbor to take on some of the work now done at that Kentucky facility. That will net the Michigan complex another 250 jobs. Toyota operates a design and engineering facility, as well as a test track, about an hour west of Detroit.

Toyota noted it will retain about 2,300 jobs in California, but the announcement is nonetheless a setback for the Golden State.

California is the single largest U.S. market for automobiles but has been steadily losing automotive employment over the last few decades, in part because of high costs and strict government regulations, but also due to simple logistics. It’s more difficult to keep assembly and parts plants supplied so far away from the primary automotive manufacturing network that is focused in the Midwest and, increasingly, in the Southeast.

Detroit’s makers no longer operate plants in California, GM abandoning a joint venture with Toyota when it went into bankruptcy in 2009. Toyota subsequently shuttered the NUMMI factory in Fremont, a San Francisco suburb, before selling the facility to battery-car start-up Tesla Motors. Tesla today uses just a fraction of the massive facility but hopes to expand operations there as it adds more products to a line currently limited to the Model S sedan.

While Toyota has not provided details of the anticipated move to Texas, it already confirmed it will restructure the marketing organization in Torrance and will offer a “voluntary exit program” to an unspecified number of employees, with others being transferred to different jobs. That move was to begin later this week.

Toyota is no stranger to Texas, meanwhile, where it currently operates an assembly plant in San Antonio producing both its midsize Tacoma and full-size Tundra pickups.