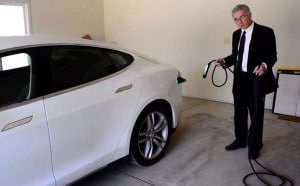 Attorney Vince Megna with the Tesla Model S that is the center of an angry lemon law dispute.

Barely a day after saying it wouldn’t comment on a lawsuit filed by a self-styled “lemon law king,” Tesla Motors has reversed course with a stinging blog post that questions attorney Vince Megna’s claims — and motivation.

Insisting the Silicon Valley start-up does “believe in lemon laws,” Tesla insisted there are “good reasons to be skeptical” about the lawsuit and denied a number of the claims being made against it on behalf of a Wisconsin doctor whose Model S battery sedan is at the center of the controversy.

To recap, the suit was announced publicly in a Youtube video by Megna, an attorney specializing in lemon laws and who has taken on some of the biggest names in the automotive business.  He represents Dr. Robert Montgomery, of Franklin, Wisconsin, who claims he has had a wide range of problems with his $90,000 Model S battery sedan that led to it being off the road 66 days during the first months after it was purchased in March 2013. The physician wants Tesla to buy it back under a law that takes affect after a vehicles is off the road at least 30 days during the first year.

But if the good doctor and his attorney thought Tesla would come along quietly, they didn’t check out the maker’s record of using social media – and the courts – to get out its own position.  Tesla forced an apology out of the New York Times for a bad review, for example.  And it has been taking on New Jersey’s blunt Gov. Chris Christie after he approved a rule blocking Tesla from setting up company-owned showrooms in the state.

(For the original story on the lemon lawsuit, Click Here.)

After initially advising TheDetroitBureau.com and other media “We don’t discuss pending legislation,” earlier in the week, Tesla has now responded to Megna with a blogpost titled “When Life Gives You Lemons.”

It opens up by stating, “we believe in lemon laws,” adding that Tesla goes “above and beyond in customer service.” The maker insists it was doing “everything reasonably possible” to assist Dr. Montgomery get his car repaired before the lawsuit was “filed with no warning.”

More significantly, Tesla contends “there are factual inaccuracies in the lawyer’s story,” starting with the number of times Dr. Montgomery demanded the factory buy back his busted car – only once, according to the company.  The blogpost also roundly hints that either some problems didn’t exist – such as the malfunctioning door handles – or might have been caused by the owner himself, as in the case of a repeatedly failing fuse.

“It’s also of interest to note that this particular lawyer filed a lemon law suit against Volvo in February last year – on behalf of the very same client,” the maker noted, offering a link to a supporting PDF file.  The post concludes by suggesting this may be an example “of the potential for lemon laws to be exploited by opportunistic lawyers.”

TheDetroitBureau.com immediately contacted attorney Megna and asked him to review and respond to Tesla’s post.  And if Tesla thought its post might end matters, the Lemon Law King made it clear the case isn’t about to be closed.

Megna vehemently countered Tesla’s comments, citing a number of errors in the blogpost, and claiming to have certified mail receipts to show Dr. Montgomery asked for a buyback three times, not once. But, “Tesla did not provide the refund or respond in any way – no call, no letter, no blog post.”

The company may respect lemon laws, but it doesn’t seem to understand them, added the attorney, suggesting that little Tesla is taking “the big corporation approach by attacking its customer, rather than addressing its own failures.”

Megna does not address the claim that he helped Dr. Montgomery file a previous lemon law suit. But Tesla doesn’t address the peculiar language in its sales contract that would require buyers to sidestep state laws and file suit in California, accepting arbitration if the maker chooses.

It’s setting up to be the classic he-said/she-said case that a court somewhere, whether in Wisconsin or California, will likely have to decide.  But one thing seems clear: this case has gotten personal.  The attack on his own credibility has clearly riled Megna who concludes his response by declaring, “I too, have a Public Service Announcement: There are companies, great companies run by Billionaires, that force consumers to give up their Freedom of Speech and Right to Trial by Jury just for the opportunity to buy an electric car.”

This could prove to be an interesting ride.