Daimler’s Zetsche Not Sold on Cells

CEO more optimistic about self-driving cars in the future. 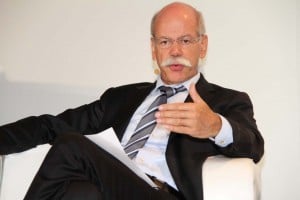 Daimler AG CEO Dieter Zetsche is not bullish on the near-term future of fuel cell cars and trucks.

Drivers looking to jump into their fuel cell-powered car or truck to run errands are going to have to live with disappointment for at least a decade, Daimler AG Chief Executive Officer Dieter Zetsche said during a round table meeting with reporters at the North American International Auto Show today.

“There are cost problems with the industrial process for making fuel cells,” he told reporters during the session. “That’s why we are working with Ford and Nissan to take out the cost. But it’s a (chicken) and egg question. You need volume to drive down the costs.

“There are also issues with the infrastructure,” he said, noting that the hydrogen fueling stations necessary for fuel cells are still few and a far between.

Last year, Ford, Nissan and Daimler established a three-way partnership to accelerate the development of fuel cell electric vehicle technology, with the ultimate goal of releasing a ready for market fuel cell vehicle by 2017.

The goal of the collaboration is to jointly develop a common fuel cell-based electrical system while reducing investment costs associated with the engineering of the technology. Each company will invest equally towards the project as a strategy to maximize design commonality, leverage volume and derive efficiencies through economies of scale.

Fuel cells are powered by electricity generated from hydrogen and oxygen, which only emit water while driving.

Toyota recently unveiled a fuel-cell vehicle it plans to put on sell in limited numbers next year. The Japanese automaker has not disclosed the actual cost of the vehicle, however.

Zetsche was more optimistic about the technology that goes into autonomous driving, which is developing very quickly – faster than many experts thought possible.

The sensors and radar required for driver assistance and autonomous driving system are already well developed and the work on the algorithms that govern the software that utilizes the hardware to make specific decisions are coming along as well.

Mercedes-Benz has taken a leading role in the autonomous driving space and its newest vehicles such as the new S-Class unveiled last year now have extensive driver assistance system that help prevent the from getting involved in an accident, he said.

In addition, Daimler engineers have demonstrated that the S-Class distronic or cruise control system with automatic braking can successfully pilot a car for up to 60 miles with relatively modest adjustments to the existing onboard technology.

(Click Here to see the Baby Benz all grown up.)

The ultimate goal of the driver assistance system required for autonomous motoring is reduce the number of accidents and save lives, according to Zetsche, who has developed into one of the industry’s leading advocates for the systems.