Some Surprising Winners and Losers in August Numbers

Ford F-Series dominates, but Camry makes its move as Acura ILX piles up on dealer lots. 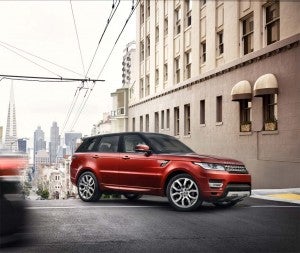 U.S. auto sales were hot in August and perhaps no vehicle was hotter than the Range Rover Sport.

August saw the U.S. automotive market deliver its strongest sales surge since at least 2006, with double-digit increases the norm, rather than the exception.

Little Subaru posted the biggest gain for the month of any major maker, up 45% over August 2012. Volkswagen, meanwhile, was among the rare losers, with a decline of 1.6% – even though it had one of its best months in the U.S. market in the last 40 years.

Strong sales can mask some big problems, but a closer look at the August sales numbers clearly revealed some winners and losers.

From an individual model standpoint, the Ford F-Series continued to dominate the U.S. sales charts last month – as it has for decades, according to numbers crunched by AutoData. But the big surprise was the sudden surge by the Toyota Camry, which nudged past the Chevrolet Silverado to land in the number two sales spot. Camry has long been the country’s best-selling passenger car, but the two full-size pickups have traditionally delivered a one-two punch on the overall sales list.

Despite a blistering sales pace for August, the Acura ILX is still not selling well. There is a 244-day supply of the slow-selling sedan.

What’s behind Camry’s surge? Actually, it may have helped that Chevy is prepping to launch an all-new Silverado, and the changeover is temporarily hurting the truck’s numbers as it slid into the number three sales slot. Even so, Camry is now one of the older models in the midsize sedan segment and newer challengers such as the Nissan Altima, Honda Accord and Ford Fusion have again been frustrated in their efforts to knock Toyota’s powerhouse off its perch.

Don’t feel too sorry for Nissan and Honda, however. The latter maker managed to nab number four with the Civic, and the Accord took fifth place in August’s sales sweepstakes.  Nissan, meanwhile, saw Altima slip into eighth.

The August Top 10 list can be divided up several ways: cars v trucks, or domestics v imports. Actually, the results would be the same. There are three truck models on the chart, all Detroit-made, the Ram series grabbing spot number seven.

We’ll put the CR-V in the car-based category, the crossover giving Honda its third Top 10 spot, at number six. Toyota finished the month with four on the list, the Prius and Corolla finishing things off in spots nine and 10.

(Click Here to read about the gains by luxury and Japanese brands in August.)

Sales aren’t the only measure of success, however.  Another revealing factor can be gleaned by counting cars in dealer inventory and factoring in the pace at which they’re being sold off. In industry-speak, the result is what’s called “day’s supply,” or how many days it would likely take to sell off the cars now in showrooms.

Here’s British automaker Land Rover shines – twice. According to an analysis by cars.com, the redesigned 2014 Range Rover Sport is hotter than hot, with just a three-day supply.

To put things into perspective, the industry considers 50 to 60 days of inventory the norm, though it can be a bit higher with trucks, for various reasons. The numbers for the Range Rover Sport may be misleading, as it’s just in launch phase and there haven’t been a lot of shipments reaching dealers yet. But the bigger Range Rover SUV, which was re-launched for 2013, is close behind with a mere six-day supply.

At the other end of the spectrum is the little Acura ILX. The upscale arm of Honda had a lot of high hopes for this entry-level luxury sedan when it debuted last year. Apparently, American consumers haven’t been convinced, and the data show Acura dealers are suffocating under a whopping 244-day supply of ILX sedans.

While new models – like the 2014 Range-Rover Sport, often experience early shortages, outgoing products can be a real headache for dealer hoping to clear out inventories and make space for their replacements. As TheDetroitBureau.com reported, many Chevrolet retailers are already seeking premiums for buyers looking to get in line for the new 2014 Corvette Stingray. But they’re handing out big deals to get rid of the leftover 2013 Corvette coupes, now facing a 206-day inventory backlog.

Other “movers” with 10 days or lower of dealer inventory include: the Ford Fusion and Fusion Hybrid, the Honda CR-V, several versions of the Mercedes-Benz GL ute – notably including the new Bluetec diesel model – the Jeep Wrangler and Subaru Forester.

The 10 models with the biggest backlog also include: the Cadillac Escalade Hybrid the Mercedes SL63 AMG, the Mercedes CL550, and three VW models, the Golf R, the standard Golf and the GTI. These “loser” vehicles range from a 141 to 244-day backlog.

Shoppers might consider that vehicles in short supply will likely yield the lowest incentives and least amount of showroom bargaining while dealers should be set to do whatever it takes to move those models with a serious backlog.