Honda Accord Hybrid Hits 50 – MPG, That Is 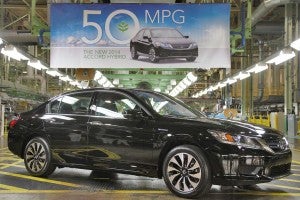 Honda bests the competition - at least in the city mileage category.

In the battle for bragging rights in the high-mileage category, Honda has landed a solid blow against the competition, its 2014 Accord Hybrid delivering an EPA-certified rating of 50 mpg in city driving.

But to put another perspective on Honda’s achievement, the 2014 Accord Hybrid gets about 10% better fuel economy around town than the first-generation Toyota Prius, a dedicated gas-electric model that used all sorts of tricks, including a super-aerodynamic, ultra-light body to maximize mileage. 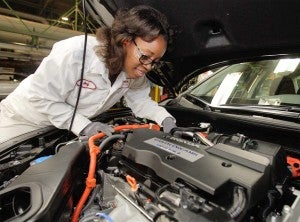 A Honda line worker assembling the drivetrain on the 2014 Accord Hybrid.

As with other hybrids, Honda’s latest is likely to appeal most to motorists doing a lot of stop-and-go driving, where its batteries routinely get recharged to boost fuel efficiency. Gas-electric vehicles tend to be less effective on the open road because the batteries don’t get recharged as often, and that’s reflected in the fact that the 2014 Honda Accord Hybrid gets “only” 45 mpg on the highway, with the EPA giving it a 47 mpg combined rating.

The closest any competitor comes in the midsize sedan segment is the Ford Fusion, which also delivers a 47 mpg combined rating, and 47 on the highway, for a distinctive 47/47/47 rating.  The classic Toyota Prius hatchback still leads the pack at 51 city, 48 highway and 50 combined, while the Camry Hybrid is rated 43/39/41.

“Even before it hits showrooms this fall, the Accord Hybrid is already surpassing the competition and claiming segment leadership,” said Mike Accavitti, senior vice president of auto operations at American Honda. “For customers looking for a 50 mpg rated 4-door sedan, there is no other choice than the 2014 Accord Hybrid.”

Honda completely redesigned the Accord last year but waited for the 2014 model-year before launching the updated hybrid as it finished development of a trio of new gas-electric drivetrains. Replacing the original Integrated-Motor Assist, or IMA, system, the 2014 Accord Hybrid adopts a new, two-motor electric drivetrain that is paired with 2.0-liter Atkinson-cycle inline-four-cylinder gas engine. Honda calls it the Sport Hybrid Intelligent Multi Mode Drive.

(The maker also has a new, lower-cost, single-motor system for the Civic and other entry-level models. And it is developing a three-motor hybrid that will provide and electrified version of its older, gas-powered Super-Handling All-Wheel-Drive drivetrain. Look for that system in hybrid versions of the Acura MDX crossover and RLX sedan, as well as the luxury division’s reborn NSX supercar.)

Notably, Honda migrates from time-tested nickel-metal hydride batteries to lighter, smaller and more powerful lithium-ion chemistry with the launch of the 2014 Accord Hybrid. A number of manufacturers are following that path though Toyota continues to stick with NMH batteries on its conventional hybrids citing their reliability and lower cost.

While Honda’s latest hybrid largely sticks with the same body as the conventionally powered Accord there are a few visual cues to alert friends and passersby you’ve gone “green,: including the Hybrid model’s unique badging, LED daytime running lamps, blue-accented grill and headlight lenses, as well as functional tweaks to improve aerodynamics, such as the rear spoiler and more efficient wheel design.

What sort of difference will the 50 mpg rating actual mean for the typical consumer? In fact, city mileage numbers for hybrids – and highway numbers for conventional vehicles – more convey bragging rights but unless you spend all your time in traffic, the combined number is what really matters.  And for the typical American motorists clocking 15,000 miles a year, that means the new Accord Hybrid would suck down about 319 gallons of fuel.

With its 30 mpg rating, the regular Accord would need 500 gallons.  So, with $4 a gallon gas, the Hybrid model would yield savings of around $724 annually.

Motorists should use that number to calculate whether the added fuel efficiency justifies the typically higher cost of a hybrid. Honda has not yet announced pricing, but gas-electric models typically carry a premium that can run $2,000 to more than $5,000.  The base car comes in at $21,995 before shipping and handling charges, while the maker also offers a more advanced plug-in hybrid that starts at $39,780.