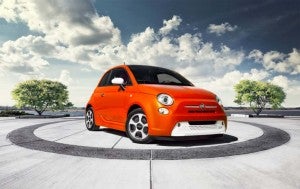 Fiat plans to sell only a few 100 of its 500e battery cars in California -- at a significant loss.

Chrysler Group will lose a substantial amount of money on every battery powered Fiat 500 that it plans to sell in the state of California, Fiat/Chrysler CEO Sergio Marchionne warned during a speech in Detroit Thursday night.

Marchionne said the new Fiat 500e is technically very impressive, having posted some of the best fuel-economy figures yet for a vehicle with an alternative powertrain. But the potential losses on the project will likely be equally notable.

“We will lose $10,000 per vehicle. Doing that on a large scale would industrial masochism,” noted Marchionne, who also took an oblique swipe at California regulators, particularly the California Air Resources Board, or CARB.

Chrysler and its Italian partner Fiat would likely not be in the battery car market were it not for CARB’s strict new zero-emission vehicle requirement. The same is the case with a number of other makers, such as Toyota and Honda, who have introduced limited-volume battery-electric vehicles they plan to sell either exclusively in the Golden State, or in California and a few other states planning to copy the ZEV mandate.

The Fiat 500e, which goes on sale in California next month, gets the equivalent of 108 miles per gallon, according to the U.S. Environmental Protection Agency and will go 87 miles on a single charge. However, Chrysler expects to sell only a few hundred electric vehicles in California to meet the ZEV mandate, Marchionne noted during a speech at the Society of Automotive Engineers annual banquet.

Despite the heavy use of government incentives, sales of EVs and “plug-in hybrids,” which can run on either batteries or use their internal combustion engine, accounted for less than one half of one percent of all cars sold in the U.S. last year – though sales have shown a slight improvement in recent months.

“We need to innovate,” Marchionne told the audience of automotive engineers. “A decade ago hydrogen was the next big thing,” he noted, but “Now its electric vehicles.”

Like a number of other industry leaders, Marchionne said he’s concerned about the government trying to pick winners and losers.

“Regulators should be technology neutral,” he added. “We can’t anticipate every possible scenario,” he said.

Despite his skepticism about electric vehicles, Fiat “is recognized as the most eco-performing automaker in Europe. In North America, Chrysler has broken new ground in the reduction of greenhouse gas emissions by offering the first, factory-built compressed natural gas powered pickup trucks in North America. Chrysler also has introduced eight-speed and nine-speed transmissions substantially improving both the driving experience and the fuel economy of our vehicles,” Marchionne said.

More improvements in the fuel economy delivered by the internal combustion engine are coming, he promised.

Marchionne also reiterated that he believes only “five or six” very large scale automakers will survive. Neither Chrysler nor Fiat would have had a chance on their own, he said. The combination of the two companies gives them the scale to carry out the investment in new vehicle lines.

“I believe that to make an adequate return, an automaker needs to produce a total of at least 6 million vehicles a year and at least one million vehicles per platform. We – the Chrysler Group and Fiat – have already completed the convergence of the three principal architectures that will drive more than 80 percent of our total volume,” he said.