Name may yet change. 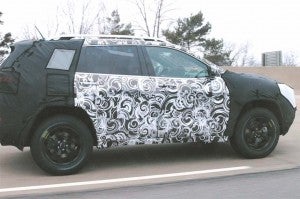 The 2014 Jeep Liberty undergoing testing prior to its introduction at the NY Auto Show.

Chrysler Group is planning to show off the new version of the Jeep Liberty at the New York Auto Show, Mike Manley, president and chief executive officer of the Jeep brand has confirmed.

Manley also said Chrysler plans to have the new version of the Liberty on sale by “the end of the second quarter,” following its debut in New York at the end of March.

Other sources inside Jeep said the final, final call on the name for the upcoming vehicle has yet to be nailed down. There is plenty of speculation Jeep could drop the Liberty name and start fresh. The final call, however, will be made by Manley and other Chrysler executives prior to the unveiling at New York’s Jacob Javits Convention Center.

The Liberty replacement is one of the Chrysler Group’s key launches this year as the automaker continues its efforts to build Jeep into a truly global brand. The new Liberty is expected to remain smaller and lighter than the new Grand Cherokee but still have the off-road capability that is one of the Jeep brand’s trademarks.

(To check out more of those spy shots, Click Here.)

Chrysler/Fiat Chief Executive Officer Sergio Marchionne said last month Chrysler plans to launch 47 all-new or significantly refreshed models over the next four years, including six from the Italian Alfa Romeo brand which is scheduled to make its return to the U.S. market late in 2013.

Jeep appears to be getting a disproportionate share of that capital to update the Grand Cherokee, Compass and Patriot models –announcements made at last month’s Detroit Auto Show – the Liberty and possibly to bring back the old Jeep Grand Wagoneer. A new entry-level Jeep is also in the works and will be produced in Italy.

“We are overspending, and we understand this. But we are doing this with a very clear agenda and a very clear intent,” Marchionne said during a conference call with analysts and reporters. “We’ve earned a lot of goodwill by providing a dramatic improvement in the quality of our products and by launching what we have launched. I still think that we need to continue to pound the ground.”

Jeep boss Manley, however, did say the new version of the Jeep Grand Cherokee being built at Chrysler’s Jefferson North plant in Detroit is already starting to be exported to the Middle East. Vehicle standards in that region are very similar to those used in the used in the U.S., making it easier to prepare models like the Jeep Grand Cherokee for shipment to countries in that part of the world, Manley said.

“Europe will come next and then Asia,” he added.

An exported Grand Cherokee sold in China is very pricey but it also considered by customers to be a premium vehicle by Chinese motorists, looking for status, he said.

Jeep ultimately plans to assemble its products in China, a move the maker believes it is critical to take the line from niche to mainstream there.