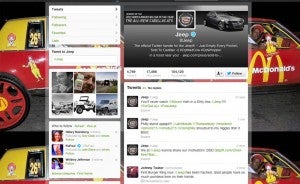 Barely a day after a highly publicized hacker attack on the Burger King account on Twitter, a similar assault was leveled at Chrysler’s Jeep brand, with tweets going out using vulgar language and claiming the automaker was sold to rival Cadillac.

Jeep officials were alerted to the assault “almost instantly,” according to a spokesperson, and were quickly able to shut down the account, while working feverishly with Twitter to regain control and restore a fake logo inserted by the hackers.

Ironically, the attack on Jeep came about 20 minutes after the automaker’s social media agency posted a report on ways to improve online security in the wake of the Burger King assault.

“We were aware of (the attack) almost instantly, spokesperson Eileen Wunderlich told TheDetroitBureau.com, adding that “the account was temporarily disabled and will be back up soon.  The first priority is to get everything back up and running (properly).” 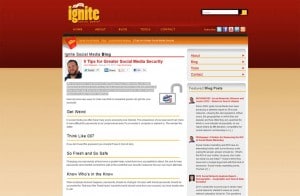 The official said several company insiders monitoring the account became aware of the breach as soon as the first hacked tweet went out. They used a separate account to reach fans to advise them of the attack while Twitter was notified to shut the account down until the problem could be brought under control.

The attack on the Jeep account closely resembled what happened on Monday to Burger King which, among other things, had its logo replaced by the McDonald’s logo. But Jeep officials quickly reacted, cutting off the hackers within just nine minutes, during which 13 fake tweets were launched, nonetheless.

The hackers replaced the legitimate Jeep bio on Twitter to announce the “sale” of the Chrysler brand to Cadillac, the luxury division of General Motors, with text switched to read, “The official Twitter handle for the Jeep – Just Empty Every Pocket, Sold To Cadillac.”

The tweets meet reference to two notorious hacker groups, Anonymous and LulzSec, and placed a link to Chicago rapper Chief Keef. There were references to drug usage and plenty of vulgar language.

The attack on @Jeep began around 12:30 PM Eastern Standard time, the first fake tweet reading, “WELCOME BACK CADILLAC #300,” and were halted nine minutes later. At this point it appears the Jeep Twitter account is running normally again.

It is unclear who was responsible for the Jeep attack, though there were clear similarities to what happened on Monday with Burger King.  The fast food chain’s account was under hacker control far longer and saw 53 fake messages launched before Twitter temporarily shut the account down.

The two attacks come just weeks after Twitter revealed that hackers had stolen about 250,000 user names and passwords, the largest security breach ever at the social media outlet. There had been concern raised after that attack that Twitter’s internal network had been further compromised giving the hackers the opportunity to create further mischief at a later date. It’s not clear if this week’s problems were related to the earlier assault.

What does appear to be the case is that the hackers have proved much more difficult to deal with than many expected. Shortly before the account was attacked, Jeep’s agency, Ignite Social Media, put up a blog post titled, “9 Tips for Great Social Media.”

Author John Patterson began by noting, “After a few hackers “Had it their way” with Burger King’s Twitter handle, we started thinking that password security is a big deal, and not everyone’s doing it right. Here are a few simple steps that can help you avoid a situation that would be, well, a whopper (#groan) of a public relations nightmare.”

Apparently more than Patterson and Ignite might have expected.