More punch from a midsize package. 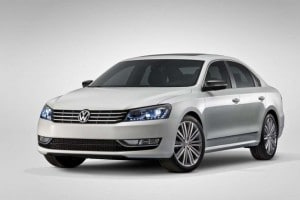 A show car for now, the Volkswagen Passat Performance Concept may yet return in production trim.

Like many of its competitors, Volkswagen has a handful of offerings to share with the media and mainstream masses next week but while it’s keeping a reported new SUV under wraps for now the German maker has decided to pull the covers off another new entry.

And the Passat Performance Concept suggests we’ll be getting a little more punch out of the maker’s midsize mainstay in the near future, even though VW is only suggesting the show car is meant to “explore this practical four-door’s sportier side.”

The overall look is still that of a practical sedan.  While some makers have been emphasizing show over go – witness the new Dodge Dart GT – Volkswagen appears to be downplaying the visual excesses.  The only real upgrades to the exterior include larger bi-xenon headlamps, LED taillights, 19-inch Luxor alloy wheels, a dual exhaust system, two-tone leather seats and carbon fiber interior accents.

Apparently VW has taken a tip from those “sleepers” from the golden age of muscle cars.  The cars you’d never bother to look twice at until they blew you away at the stoplight.

And the Passat Performance Concept apparently has the power to do that, a 1.8-liter turbocharged inline-four roaring out 250 horsepower through a six-speed automatic.  If you don’t have your 2013 full-line press kit handy we’ll save you the math.  That’s a full 80 hp more than the base 2.5-liter I-5, though 20 less than the 3.6-liter VR6.

VW is also providing the concept with a sporty suspension system and tightened EPS steering.

Since launching production of a U.S. version of the Passat nearly two years ago, VW has once again become a significant player in the midsize market.  And few would be surprised to see it broaden the range of variants offered on the midsize platform.  We’d anticipate hearing more about the Passat Performance Concept in the relatively near future.