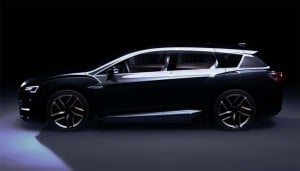 Subaru is getting ready to roll out its first hybrid as it continues to refresh its product line, which has doubled in its market share in the U.S. over the past five years.

Officials from the Japanese automaker declined to offer any details about the new hybrid, which is expected to make its debut at the New York Auto Show at the end of March. But Kenichi Yamamoto, director of product management and coordination at Subaru of America, confirmed parent Fuji Heavy Industries is working on a hybrid model.

Other Subaru officials also acknowledged that a hybrid vehicle was in the works and could debut this spring.

Yamamoto explained that Subaru’s interest in hybrid vehicles follows the steady expansion of hybrid sales in Japan. Hybrids now account for a large and growing share of the new vehicles sold in Japan particularly those from Toyota, Honda and Nissan, Japan’s three largest automakers. 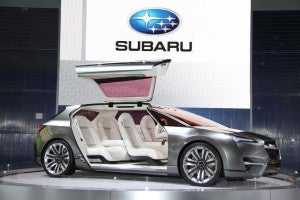 Subaru first showed a hybrid in this 2009 gullwinged concept vehicle.

In an effort to compete, Subaru feels it has to offer its own gas-electric drivetrain to consumers in Japan as well as in the U.S., added Yamamoto.

While he declined to offer any details, Subaru has offered some hints in recent years, first showing off a mild hybrid concept in 2009 and then revealing a Sport Tourer Concept using a hybrid drivetrain at the 2011 Tokyo Motor Show.

The show car was powered by a 2.0-liter turbocharged inline-four engine paired with an electric motor making a modest 13 horsepower of assist. Energy was stored in a small lithium-ion battery pack recharged by regeneration during braking and coasting.

Which vehicle will get the new hybrid system remains a matter of speculation.  Some sources contend the Forester will be first, but with Subaru promising to boost its fleet fuel economy by 30% by 2015 it is expected to offer the new powertrain in several different product lines eventually.

Meanwhile, Subaru is continuing to run up its sales totals in the United States. It is in the process of replacing the popular Forester with an all-new model this spring as continues to renew its product line.

Last year, Subaru sold a record 336,441 vehicles to customers in the United States. It was the fourth year in a row that Subaru posted record sales and the company has now doubled its U.S. market share over the past five years — from 1.2% in 2007 to 2.3% at the end of last year, noted Michael McHale, Subaru of Amerca director of communications.

Subaru sales grew 26% in 2012, according to Autodata. Only Volkswagen and Toyota did better.

“We’ve doubled our sales in five years,” McHale said, “and we’re continuing to grow our sales,” he said.

McHale also said Subaru is continuing to widen its customer base. Industry data show a higher-than-average brand loyalty rate, but the brand’s growth has been fueled by conquests.  More than 60% of the Subarus sold in 2012 went to new customers, added McHale.

In addition, once considered something of a regional brand that catered to customers in the North East and in places such as Colorado where the winters are harsh, Subaru has now begun to attract customers in the South.

Subaru also is growing its market share in some of its traditional strongholds – in Portland, for example, it now stands are 8%, which is roughly equal to that of Chevrolet.