Daimler Betting Small Can Be Big 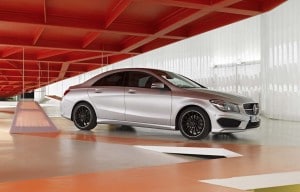 Perhaps nothing symbolizes the Mercedes-Benz brand like its classic S-Class model. But while the big sedan is set for a remake next year, expect Mercedes and the sibling Smart brand to put an increasing emphasis on downsized products that reflect the ongoing shift in the global luxury market.

While Zetsche stresses it is “very important to maintain and strengthen our role in traditional segments,” he is quick to add that, “If we want to grow and don’t want to lose our customers, we have to downsize.”

Mercedes offered a hint of what’s to come during a sneak preview at the North American International Auto Show in Detroit earlier this month, providing reporters a brief look at the all-new 2014 Mercedes-Benz CLA.

The new model picks up the coupe-like sedan design language first introduced on the maker’s traditionally sized CLS line. The CLA will be the smallest product to bear the maker’s tri-star badge when it reaches the U.S. market later this year – though an even more compact update of the Mercedes-Benz A-Class line recently went on sale in Europe.

Unlike some downsized products, Mercedes intends to maintain a high level of content on the CLA. The industry has been struggling to break out of the paradigm that has traditionally measured the price of a luxury vehicle by the pound or inch. That shift in thinking appears to be taking hold in Europe and some other markets where crowded roads and high fuel prices have convinced even the most affluent of buyers to opt for smaller products.

Whether that strategy will click with buyers in the U.S. remains to be seen, but it could be critical because, cautions Zetsche, “It’s more difficult to have comparable margins on the smallest segments. You have to have a balanced portfolio…but you never make as much money on an A-Class as you do on an S-Class.”

That’s been a particular challenge for Daimler when it comes to its other automotive brand, Smart. The once-promising marque has turned into a serious financial drain and the German maker has had to repeatedly restructure the Smart subsidiary.

Currently offering just one model, the fortwo, and a few variants that include a new battery version, Daimler hopes to power up the brand through a money-saving joint venture with French automaker Renault and its Japanese alliance partner Nissan.  They are developing an update and will add a four-seater.  It will be sold as both the Smart fortwo and Renault Twingo.

Originally, Smart had aspirations to offer a much larger line-up and considering the success of British rival Mini – which now has seven different model lines, some anticipate Smart will take a similar direction. But, “at this point,” insists Zetsche, that is not in the plans.

Don’t expect those big Mercedes products to go away.  In fact, with the recent closure of Daimler’s ultra-luxury brand, Maybach, Mercedes is moving even more upmarket to take the abandoned brand’s place.

But with rivals like Audi and BMW putting an increased emphasis on small products, Daimler planners know that they can’t cede the market. They have to downsize, as well, while finding ways to keep those new, smaller models in the black.