20 for 2013 – Cheapest, Most Expensive Vehicles to Insure 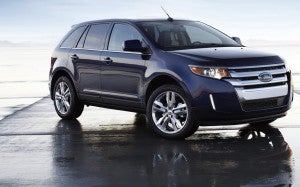 A new study finds the Ford Edge has the lowest insurance costs of any 2013 model.

Sure, you just got a great deal on that new car, but it may not seem like nearly the bargain when you go to line up insurance.

The cost of insurance a 2013 model can vary widely, from as little as $1,128 to $3,357 a year, according to a new study – and that’s assuming you’ve got a good driving record and live in a place where insurance companies don’t sock you with added costs due to high local loss rates.

It’s probably no surprise that you’re likely to pay the most to cover a sporty luxury car, but there have been some unexpected shifts uncovered by Insure.com in its annual study of the least and most expensive vehicles to buy coverage for.

Notably, SUVs and crossovers have replaced minivans when it comes to finding the most affordable 2013 model-year vehicles, displacing minivans.

At the top of the affordable insurance list is the 2013 Ford Edge SE, averaging just $1,128 a year. Other top-ranked vehicles include the Jeep Grand Cherokee Laredo, the Subaru Outback 2.5i Premium, the Kia Sportage and the Jeep Patriot Sport.

At the other end of the spectrum, the survey finds a 2013 Mercedes-Benz CL600 will set an owner back $3,357 annually, Mercedes had the eight most expensive products, in fact, with a number of Porsche, Jaguar and BMW models following close behind.

The website notes that insurance rates are based on a variety of factors including the number of claims filed and how expensive they run.  In turn, claims are impacted by the cost of repairs and any medical bills involved in a collision.

The figures Insure.com quotes are a best-case scenario.  Someone with points on their record should expect to pay more for coverage – especially for expensive and powerful vehicles.  Rates also may vary depending on the state and community where you live.  Insurers frequently penalize those who live in an area with high theft or collision rates.

According to Insure, the 10 least expensive models are:

At the other end of the spectrum, the most expensive vehicles to insure are: