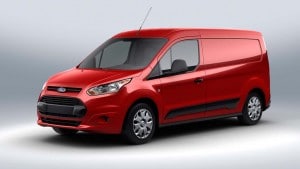 The 2014 Ford Transit will replace the maker's aging commercial workhorse, the old Econoline.

Contrary to what Wall Street believes fleet and commercials customers represent a vital and profitable part of the automotive business and Ford Motor Co. plans to use its “One Ford” strategy to nail down more of that business in the U.S. and abroad.

The maker has formally unveiled the all-new U.S. version of its Transit and Transit Connect vans – and with the exception of a “Wagon” version of the smaller model, the target market will be fleets and individual commercial buyers, such as contractors, florists, plumbers and caterers.

Joe Hinrichs, Ford’s new president of the Americas, said the all-new 2014 Ford Transit full-size van will be the critical replacement of the maker’s durable Econoline van, also known as the E-Series, which was last redesigned in 1992.

The new van, which was developed under the auspices of CEO Alan Mulally’s “One Ford” program, will offer professional tradesmen and commercial fleet customers a diverse array of body styles and configurations tailored to their work needs, segment-leading fuel economy and low cost of operation, he said.

Ford has been the leader in selling commercial vehicles for more than one third of a century. For example 57% of the shuttle business use the Econoline van, while 59% of the vehicles used for ambulances are based on Econoline vans.

As part of the rollout of the new full-size van next year, Ford will introduce a new compact diesel engine – a significant move as the maker has largely focused on its EcoBoost or hybrid technologies in the U.S. market.  Peter Lyon, the Ford engineer in charge of the new engine’s development, said the 3.2 Liter PowerStroke diesel combines knowledge from engineering teams in both North America and Europe.

The 6.7 liter engine now used in the Ford F-Series, which was the first new diesel designed in house at Ford, suffered some growing pains when it was introduced three years ago.

Lyons said Ford believes the new engine will be the most fuel-efficient in the segment. “The 3.2-liter diesel is being already being widely in global ranger program, he added. “We can’t build enough of them,” he said.

(Ford’s new Transit Connect Wagon gets it back in the minivan game. Click Herefor more.)

Overall, Ford sold 788,000 commercials vehicles last year, which represents more 38% of the commercial fleet business in the U.S. But less than one third of Ford’s commercial sales went to the traditionally low-profit car rental companies. Financial analysts have long been critical of sales to rental fleets because they not only generate low profits but also tend to lower the residual – or trade-in — value of new retail vehicles.

Jim Farley, Ford global executive vice president of marketing, said the commercial fleet business at Ford is broad as the company offers vehicles in seven different classes and has established a customer-friendly network of 610 dealers across the country.

“The people in those dealerships know their customers,” Farley stressed.

He noted commercials vehicles have long been a really important and profitable part of the company’s business. “Commercial truck business is part of the company’s DNA,” Farley said. “We talk to these customers every day. They’re hard working, self-reliant, well trained. Very success oriented and interested in new technology,” Farley added.

Ford is the second-largest commercial brand in the world and best-selling commercial vehicle brand in North America.

“Commercial buses and vans are a growth opportunity for Ford,” Farley said. “People need to carry things. Now is our chance to grow globally,” Farley said.

Farley noted Ford had just launched the new Ranger pickup truck in an array of expanding markets such as Thailand, South Africa, China and Brazil among others. However, while the global Ranger is winning customers in other parts of the world, Ford has no plans to bring it to the U.S., Farley said. Compact trucks represent less than 1% of the market in the U.S., he noted.

Not everyone agrees.  Toyota and Nissan continue to target the compact pickup segment and General Motors plans to get back in the game with new Chevrolet and GMC models in 2013.

Meanwhile, there’s growing competition in the commercial truck market, as well, from both Daimler, Ram and Nissan, which means Ford’s new Transit and the smaller Transit Connect will have to precisely hit the mark if the maker hopes to retain its segment lead.