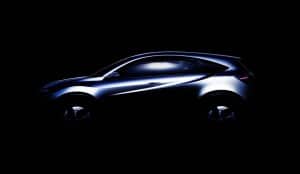 Honda plans to unveil the Urban SUV Concept at next month’s Detroit Auto Show, a crossover that will be based on the Japanese maker’s subcompact Fit model.The North American International Auto Show, as it’s formally known, will be awash with downsized crossover-utility vehicles – including the long-rumored Lincoln MKC which will share some of its basic underpinnings with the small Ford Escape, albeit trimmed out for the luxury market.

Small cars, in general, are rapidly gaining ground as fuel prices nudge ever upward. According to Ford Chief Operating Officer Mark Fields, B- and C- segment models have jumped from 13% of the overall U.S. market to 20% since 2005. And the trend is expected to continue at an even faster pace.

Nowhere is that expected to be more apparent than in the compact and subcompact crossover niches. Manufacturers are rapidly adding ever-smaller crossovers such as the Buick Encore and BMW X1, both in mainstream and upscale market segments.

Honda is offering little detail other than to describe the Urban SUV as “a global concept model combining a sporty and dynamic SUV profile with a spacious, functional interior.”

But as has been the case with most recent Honda show cars, the Urban SUV is expected to be a thinly disguised take on a production model to follow. It will likely come to market soon after Honda opens its new plant in Mexico, a facility that will supply North America and other markets with the more conventional Fit subcompact.

CUVs, in general, have been fast gaining ground in the U.S. market so adding another to a line-up that already includes the likes of the Pilot and CR-V – as well as the upscale Acura brand’s RDX and MDX – could go a long way towards helping Honda meet its goal of boosting North American sales by 20% — to 2 million – by 2016.

Lincoln has some ambitious goals in mind, as well, for what is expected to be called the new MKC. That compact crossover will be one of four new models the Ford Motor Co. luxury brand plans to introduce between now and 2014 – a roll-out also including the new MKZ, a new version of the larger MKS and a complete replacement for the aging, full-sized Navigator SUV.

Expect to see the MKC share many of the same design details that debuted on the 2013 Lincoln MKZ, including the well-reviewed new horizontal grille that Lincoln design chief Max Wolff likens to an eagle’s outstretched wings.

In this case, the MKC will be based on the same C-segment platform as the compact Ford Escape – which is also shared with the Ford Focus and the new C-Max people-mover.

Due to hit showrooms in 2014, the new MKC is expected to be offered with several different powertrain options, almost certainly including the Ford 2.0-liter EcoBoost but possibly also the smaller 1.6-liter turbocharged EcoBoost.

The new entry could be even more critical to Lincoln than the production Urban SUV will be for Honda. Struggling to get back on luxury buyers’ radar, Lincoln sales have slipped 3% for the first 11 months of 2012, even as the overall U.S. car market has gained about 15%.

Expect to see a number of other small crossovers reach market in the coming months.