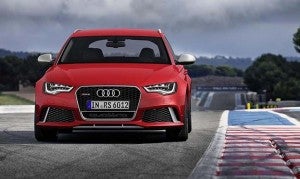 Audi's third-generation RS6 Avant will make its debut at the Detroit Auto Show next month.

Audi’s third-generation RS6 Avant will be making its debut at the Detroit Auto Show next month, but the maker has offered up a sneak peek at what will be one of four new RS offerings added to its line-up during 2013.

The new RS6 abandons the old Lamborghini-based V-10 in favor of a new 4.0-liter twin-turbo V-8 making a significant 552 horsepower.  The engine is essentially the same powerplant used by the latest-generation Bentley Continental. And to keep it in the broader Volkswagen AG family while putting things into perspective: the new Audi RS6 Avant is expected to deliver 0 to 100 kmh (0 to 62 mph) times of just 3.9 seconds.  The Porsche 911 Carrera S needs 4.5 seconds to get there.

As the new RS6 will also feature cylinder deactivation – allowing it to shut off four of its eight cylinders when loads are light — it is anticipating better fuel economy than the outgoing model.  Also helping drive up mileage, the new Audi performance sedan will weigh in at about 200 pounds less than the old RS6, and it will be outfitted with new Stop/Start technology to shut its engine off instead of wasting gas idling.

If anything, the look of the new Audi RS6 Avant has been surprisingly toned down, the emphasis on subtle performance cues, rather than blaring design elements like the old model’s bulging wheel arches. The new RS6 gets a split, rather than single-frame grille.  New additions include a lower splitter and large wings in the lower air intakes to better channel air flow.

Twin-oval tailpipes can be ordered in black, though chrome is the standard finish.  The 21-inch wheels and tires are the biggest in the Audi catalogue.

The Audi RS6 Avant sits nearly an inch lower than the standard A6 and is fitted with a unique RS air suspension. An adjustable sport suspension with adjustable Dynamic Ride Control is also available using standard steel springs and variable shocks.

The new engine actually falls short of the old Lambo V-10 on the horsepower front, 552 versus 572.  But the lighter weight and improved aerodynamics of the new RS6 more than compensate, according to Audi. The maker says the new model will have a 155 mph top speed – increased to 189 mph with the Dynamic Plus package.

Look for Audi to add RS versions of the A5 Cabriolet, A7 and Q3 later in the year. In fact, the Q3 RS will be the first crossover to wear the Audi RS badge.