Toyota Looking at New Supra – But Will it Be Electric? 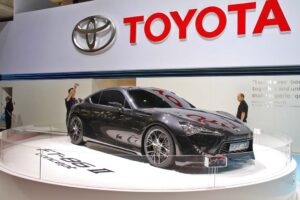 Toyota's FT-86 Concept II could serve as the platform for the long-lamented Supra. But might Toyota turn to Tesla to help develop a battery drivetrain?.

“Passion” is a word one hears a lot in conversations with Toyota executives these days, up to and including President Akio Toyoda, who points to recent introductions like the Scion FR-S and Lexus GS to underscore his intentions.

But it’s beginning to look like that’s just the beginning of Toyota’s performance aspirations, with new reports suggesting there could be at least a couple more performance machines on the Japanese giant’s horizons – notably in the form of all-new versions of the long-lamented Supra and MR-2 models.

But, as the new FR-S demonstrates, Toyota may take a very different approach in bringing those – or other – performance models back to life. One very strong possibility is that it could turn outside for help, perhaps to the likes of California-based Tesla Motors to provide a battery-based drivetrain for a new Supra.

The rebirth of Supra seems all but certain, according to various sources, notably including Tetsuya Tada, who served as chief engineer on the FR-S program which was a joint venture with Japan’s Fuji Heavy Industries – otherwise known as Subaru which sells the all but identical BRZ.

“The president (Akio Toyoda) has asked me to make a successor to the Supra as soon as possible,” Tada told Asia One, adding that Toyota needs to balance its environmentally friendly image by also producing some products that are just plain “driving fun.”

“We must balance these two aims otherwise users won’t recognize us a true carmaker,” he emphasized

Tada told Asia One there was no hard timetable, though it could take as much as five years to bring the Supra and MR-2 back, with the bigger and more expensive model coming first.

As to specifics on the drivetrain, Tada was silent.  But that doesn’t mean industry sources aren’t doing some well-founded speculation based on other information that has come out of Toyota in recent months.

For example, senior company officials have hinted they plan to work with Tesla on a product to follow their first joint venture – the Silicon Valley start-up providing the battery drivetrain for the recently introduced Toyota RAV4-EV.  A sports car seems to be the high priority topic of discussion.

That fits in line with comments made by Tesla’s design chief Franz von Holzhausen who, last July, told Britain’s Autocar that the maker is also looking at a sports car to follow the recent launch of the Model S battery-electric sedan and next year’s planned introduction of the Model X crossover.

“We will become more experimental as we develop as a brand,” von Holzhausen said. “Our cars need to have some personality.”

The designer indicated the concept under study would be a 3-Series competitor – which appears in line with where Toyota might position a reborn Supra – and would make use of the same flexible platform found in the Model S.

Tesla has made a point of emphasizing both the performance and range of the Model S, something Toyota also spotlights with the RAV4-EV.

Going with battery power could permit Toyota to balance what chief engineer Tada called the company’s “two aims,” and do it by sharing development cost and efforts with Tesla – which could also use the big Japanese maker’s help in bringing new product to market.

Until recently, the idea that Toyota would do anything but go it alone on a Supra replacement might have seemed unthinkable. But times have changed.  Not only has the maker turned to Subaru for the FR-S and to Tesla for the RAV4-EV, but it is also partnering with both BMW and Ford on the development of advanced drivetrain systems, including hybrid technology that could be used in a future version of the full-size Tundra pickup.

“No one,” says Yoshi Inaba, president and COO of Toyota Motor North America, “can handle it all by themselves.”