“Down to single digits.” 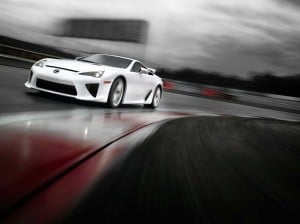 Better hurry if Dad wants one for Father's Day.

Looking for an appropriate last minute Father’s Day present for your dad the hedge fund manager?

Better move fast if the $375,000 Lexus LFA is high on your list.  Even if the price tag doesn’t put it out of your reach, you may soon be out of luck, according to an official with Toyota’s luxury subsidiary.

After two years, it seems Lexus has just about run out of the 500 carbon-fiber supercars it built and isn’t planning to produce any more.

“The supply is down to single digits,” said Tim Morrison, Lexus vice president of sales, and most of those are actually tied up by dealers.

Following the presentation of the decidedly more mundane Lexus ES, Morrison said LFA sales were considered a success since it created a huge, positive halo for the brand. 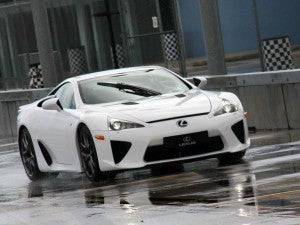 The Lexus LFA uses active aero and a high-rev V-10 to reach speeds of up to 202 mph.

Lexus promoted the LFA as not only just another supercar but one that featured some significant technological breakthroughs.  Notable was the extensive use of carbon fiber — in this case, the light, strong but extremely expensive material was woven using a technique borrowed from the fabric industry.  (Lexus parent Toyota original started out as a textile manufacturer.)  The car’s 552 horsepower V-10 was developed with the assistance of Yamaha and features titanium valves and connecting rods, the better to push it to a 9,000 RPM redline.  With advanced aerodynamics including an active rear spoiler, the LFA is capable of 0 to 60 times of 3.6 seconds with a Ferrari-challenging top speed of 202 mph.

(For a review of the Lexus LFA, Click Here.)

Not that many LFAs made it to the States, fewer than 200 shipped here — with most of those going to customers in high-profile regions such as California and Florida.  Only about two-dozen were actually sold in the Midwest through Lexus’ Chicago Region, Lexus officials said.

The LFA was a pet project of Toyota chairman Akio Toyoda, himself a serious racing and high performance fan, but the company has not made any kind of commitment to build a next-generation model that would maintain the Lexus presence in the supercar segment.

“There are no plans for a replacement,” a spokesman said.