BMW Has Big(ger) Plans for its High-Performance M Brand 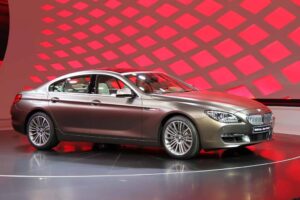 Even as it gets set to launch sales of its new M6 model, BMW is looking at ways to further expand its  high-performance brand-within-a-brand, a senior executive told TheDetroitBureau.com.

Once limited to a handful of limited-production offerings, BMW now offers M versions of more than half of its line-up – with several key omissions, including the flagship 7-Series, but that may soon change, noted Ludwig Willisch, CEO of the maker’s North American sales subsidiary.

Willisch said he also expects the maker to eventually make extensive use of strong and lightweight carbon fiber, perhaps even in such models as BMW’s best-seller, the 3-Series.

The German executive was in Santa Barbara for the first U.S. media drive of BMW’s new M6 and Gran Coupe models.  The latter is a 4-door version of the maker’s classic coupe, the 6-Series – and intended to go up against the likes of the Audi A7 and Mercedes-Benz CLS.

Initially, U.S. buyers will see a 640 version of the Gran Coupe, with a bigger 650 to follow.  And Willisch revealed that an M version of the coupe-like sedan will likely reach American showrooms about a year from now.

Formerly the head of the high-performance sub-brand, Willisch remains enthusiastic about expanding its reach.  In particular, he is pressing corporate headquarters in Munich to also add an M7 model.  Until now, the Bavarian maker has said it would not do an M version of its flagship model but that sentiment appears to be changing, especially with Willisch’s counterpart in China also lending his support.

“I think we will get it,” the BMW North America CEO said, though he didn’t offer a timetable.

Asked whether there’ll eventually be an M version of all BMW models, Willisch said no, in particular ruling out the X1 and X3 Sport-Activity Vehicles, even though there is strong demand for the M versions of BMW’s X5 and X6 SAVs.

But BMW will offer a range of accessories through its new M Performance line that will be able to beef up the smaller crossovers – and other models in the BMW line-up for customers who don’t want to move all the way up to a full-bore M edition.

Willisch also ruled out the possibility of importing the first BMW M diesel model, the M 550d xDrive, which was unveiled at the Geneva Motor Show earlier this year.  With its triple-turbo 3.0-liter inline-six making 376 horsepower, it is able to turn 0 to 60 times of only a few tenths slower than the gas-powered M6.

The problem, according to Willisch, is that “it would be too expensive to homologate,” especially considering the relatively few copies BMW expects to sell.

Even as BMW expands its performance line-up it is also making a concerted push into greener technologies, notably with another sub-brand, dubbed BMW i.  The first two offerings will be the i3 city car, a battery-electric vehicle, and the more sporty i8 plug-in hybrid.

To maximize performance and range while minimizing the size of the battery packs in the two vehicles, BMW will make extensive use of carbon fiber, primarily for the bodies of the i3 and i8 models.  They will ride on aluminum-intensive chasses.

BMW is investing heavily in the development of carbon fiber hoping to bring down its cost, said Willisch, during a conversation with TheDetroitBureau.com.  The challenge is to sharply reduce the complexity of the manufacturing process – but he hinted at significant advances.  And BMW isn’t alone.

British maker McLaren required 3,000 manhours to produce the carbon fiber components in the $1 million F1 supercar a decade ago.  It cut that to about 400 with the SLR, a $400,000 model it produced in a subsequent joint venture with Mercedes.  The carbon fiber body and parts in the new, $250,000 McLaren MP4-12C require barely a half-dozen hours of labor.

If BMW can achieve similar breakthroughs, Willisch suggested, the maker hopes to start using the fuel-saving material in more mainstream models – perhaps taking carbon fiber all the way down the line to the 3-Series.

Even if carbon fiber remains out of reach, he stressed, BMW is making “lightweighting” one of its key goals as it faces both customer and regulatory demands for better fuel economy.  While the executive said there is no set, across-the-board weight reduction target, the goal is to pull mass out of every new model, which could mean savings of several 100 pounds on some future lines – even as those new models will get additional content to meet customer demands and stricter regulatory requirements.