Unclear if verdict will set a precedent - or survive an appeal. 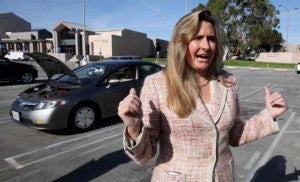 A California woman angered by the relatively poor mileage delivered by her Honda hybrid has won a small claims lawsuit awarding her nearly $10,000 in damages.

Heather Peters quickly declared it a “victory for Honda Civic owners everywhere,” after a Los Angeles Superior Court Commissioner agreed that the maker had known that owners of the 2006 Civic Hybrid would not get the mileage promised.

But victory is anything but certain, Honda indicating it isn’t ready to accept the verdict rendered Wednesday and will appeal.

A former corporate attorney, Peters opted out of a proposed class action settlement that she felt did little but enrich the trial lawyers handling that suit, choosing instead to fight her own battle.  She has said she hopes her victory will inspire other owners to take Honda on directly through the small claims process, though it is unclear how many will be willing to go that route.

“At a bare minimum Honda was aware,” Commissioner Douglas Carnahan wrote his judgment, “that by the time Peters bought her car there were problems with its living up to its advertised mileage.”

The maker has faced a number of lawsuits – most since consolidated into a class action – alleging that the 2006 Civic Hybrid feel far short of its claims.

“The sales force said 50 miles per gallon, but they didn’t say if you run your air conditioning and you remain in stop-and-go traffic, you’re going to get 29 to 30 miles per gallon,” said the 46-year-old Peters prior to the trial.  During her subsequent testimony, she claimed that as the Civic’s nickel-metal hybrid battery deteriorated, its fuel economy continued to drop.

During his testimony in L.A. Superior Court, Honda technical specialist Neil Schmidt insisted Honda was simply following the law by citing mileage numbers assigned by the Environmental Protection Agency.  “We have no choice,” he stated.  “We have to put those numbers on the label.”

In fact, as TheDetroitBureau.com previously reported, automakers may report lower fuel economy numbers if they do not agree with the EPA test results – but there appear to be few, if any, manufacturers who have done so.

Honda is by no means the only maker to face the wrath of its customers over excessively optimistic mileage ratings.  Toyota had similar problems, especially in the early years of the Prius hybrid.  The EPA made significant changes to its test procedure in 2008 in an effort to bring hybrid figures closer to real-world reality – something makers and consumers agree has helped significantly.

Honda has negotiated a settlement with the attorneys handling the class action lawsuit, but while they would receive $8.5 million for their efforts, individual attorneys would be awarded just $100 to $200 apiece in cash, along with a $1,000 certificate that could be applied to the purchase of a future Honda product.

Critics contend that the settlement was merely a way for Honda to ensure angry buyers would wind up staying with the brand.

The members of the class would have until February 11th to decide whether to accept the deal, with a San Diego judge expected to rule on whether to approve the settlement sometime next month.

Owners who declined to participate could file their own action against the maker.  Small claims would be just one of the options available.  That route is typically designed to handle cases involving straightforward claims and relatively small amounts of money.  In California, the maximum figure is $10,000 – Peters being awarded $9,867 for the loss of value of the vehicle and her higher fuel costs.  In other states, small claims limits range from $2,500 to $15,000.

But one of the big advantages of the process is that it is designed to limit costs for both parties and, for an individual suing a large corporation, that can level the playing field by restricting access to attorneys while arguing before the judge.

“Sometimes big justice comes in small packages,” said the 46-year-old Peters after being advised of her victory.

Typically, a defendant has the right to appeal after losing a small claims verdict and, in some states, the case can be moved to a more traditional court setting.

Honda issued a terse statement on the verdict declaring, “We disagree with the judgment rendered in this case, and we plan to appeal the decision.”  The timing of that appeal is uncertain.

LOS ANGELES (AP) – The Southern California owner of a Honda hybrid car won her unusual small-claims court lawsuit against the automaker over the vehicle’s failure to deliver its stated fuel economy.

“At a bare minimum Honda was aware … that by the time Peters bought her car there were problems with its living up to its advertised mileage,” he wrote in the judgment.

Peters opted out of a class-action lawsuit so she could try to claim a higher payment for the failure of her Civic to deliver the 50 miles per gallon that was promised when she bought it.

Informed of the decision by The Associated Press, Peters exulted, “Wow! Fantastic.”

“I am absolutely thrilled. Sometimes big justice comes in small packages,” she said. “This is a victory for Honda Civic owners everywhere.”

Honda hadn’t seen the decision Wednesday afternoon but planned to issue a statement after it was reviewed, said spokesman Chris Martin.

She launched a website, DontSettleWithHonda.org, and said she was contacted by hundreds of other car owners seeking guidance in how to file small claims suits if they opted out of a class-action case already filed.

The upside of small claims court is that there are no attorneys’ fees and cases are decided quickly. Individual payments are far greater than in class-action cases.

Honda’s proposed class-action settlement would give aggrieved owners $100 to $200 each and a $1,000 credit toward the purchase of a new car. Legal fees in the class action case would give trial lawyers $8.5 million, Peters said.

Legal experts had said it was unlikely that all owners would take the small claims route because of the time and energy involved in pursuing such lawsuits. But it was a unique approach that could have an impact.

Carnahan held two hearings on the claim in January.

Peters claimed her he car never came close to the promised 50 mpg and that it got no more than 30 miles per gallon when the battery began deteriorating. She still owns the car and wanted to be compensated for money lost on gas, as well as punitive damages, amounting to $10,000.

A Honda technical expert who testified at an earlier hearing said the company was required by federal law to post the sticker estimating the highest mileage the car could get. But he said the mileage varied on how the car was driven. The company said Peters was not deceived.

A judge in San Diego County is due to rule in March on whether to approve Honda’s class-action settlement. Members of the class have until Feb. 11 to accept or decline the deal.

Small claims courts generally handle private disputes that do not involve large amounts of money. In many states, that means small debts, quarrels between tenants and landlords and contract disagreements. Attorneys aren’t usually there; in California, litigants aren’t allowed to have lawyers argue their case.