VW More Than Doubles Profits in 2011

Sales up nearly 15% as maker punches past Toyota. 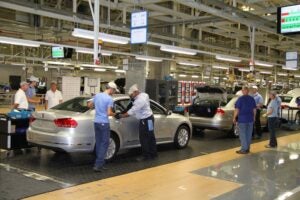 Workers assemble a 2012 VW Passat at the maker's new assembly plant in Chattanooga.

If the latest numbers are any indication, Volkswagen is clearly on its way towards world domination.  The German maker is reporting that its profits more than doubled last year while global sales jumped 14.7%.

Volkswagen, no longer limited to the “people’s car,” but owning or partnering with a dozen different brands, has set out a goal of ending the decade as the world’s largest automotive manufacturer.  It didn’t quite get there in 2011, but with sales soaring to 7.2 million it punched by struggling Toyota, landing second only to revived U.S. giant General Motors.

But shareholders and analysts are, for the moment, focusing on the earnings numbers, which totaled 15.41 billion Euros, or $20.5 billion, up from 6.84 billion Euros in 2010.  The latest figure is a full 1.5 billion Euros ahead of what analysts had been collectively forecasting – and triple what rival GM earned in a record year of its own.

Revenues, meanwhile, soared 26%, to 159.3 billion Euros, about 2% ahead of the consensus, according to tracking firm FactSet.

VW’s earnings were bolstered not only by the jump in sales but also by accounting factors that, ironically, stem from the maker’s ongoing, but currently stalled, efforts to merge with smaller German automaker Porsche.  Pre-tax profits came in at 18.93 billion Euros, up from 8.99 billion in 2010.

What would effectively be a takeover stems from a divisive David-and-Goliath battle between the two makers.  Porsche staged a raid on Volkswagen stock, hoping to swallow the bigger maker but was eventually frustrated in its bid by complicated German politics – the controlling stake in Volkswagen held by the state in which the industry giant is located.

Unfortunately for Porsche, it has now become the target of numerous lawsuits alleging financial improprieties as a result of its failed effort.  VW has put the merger on hold pending resolution.

Industry analysts say that despite that setback Volkswagen is firing on almost all cylinders.  It has made major gains in every market segment, from lowly Czech-based Skoda up to high-line brands Bentley and Lamborghini.  If there is a single potential problem it’s with the Spanish Seat marque, which is rolling out new products aimed at better defining its brand.

Significantly, VW is making gains worldwide, especially in emerging markets such as China.  But the maker has also scored an initial success with several recent U.S. introductions. That includes a version of the midsize Passat designed specifically for the States now being produced at an all-new U.S. assembly plant.

After years of neglecting the American market, VW has acknowledged it needs to succeed there to achieve its global sales targets. But it still has a long way to go, aiming to more than double U.S. sales to 800,000 by 2018.