How the Supreme Leader got his last ride in a stretch Lincoln. 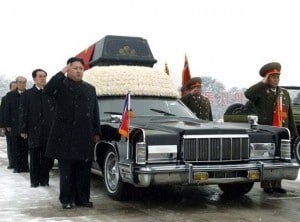 It's a real Lincoln carrying Kim Jong-il to his final rest.

Eagle-eyed–and certified car-nutty—auto enthusiasts have been mystified the last couple of days by an obvious anachronism in the funeral procession of Dear Leader Kim-Jong-il: a real, if elderly, Detroit Lincoln stretch limousine leading the parade, coffin on top.

Such a picture was circulated on December 27 by the Democratic Peoples Republic of Korea (DKPR) propaganda machine.

The first question was, is this for real or some cheap Commie trick? Everyone knows the U.S. is still technically at war with North Korea, only an armistice in 1953 having ended regular fighting. So how could a mammoth 1970s Lincoln have crossed the de-militarized zone (DMZ) separating the two Koreas?

I confess my eyes weren’t glued to the TV report about Kim’s funeral. But fellow auto historian and some-time co-author (Ford Dynasty: A Photographic History, 2002, Arcadia) Jim Wagner brought it to my attention.

This was followed of course by various email speculations among gearheads about what the car could be and how it got to Pyongyang. I suggested that it might have been a Russian or Chinese copy, since both countries have been known to reverse-engineer for copying even more complicated American products, such as a B-29 Superfortress the Soviets cloned after it made an emergency landing in Siberia during World War II.

Jim’s son Andrew chimed in with his belief, after resorting to Wikipedia, that the mystery funeral car might indeed have been a Soviet GAZ-14 Chaika, updated from the Packards once copied for the Commissars. But the GAZ 14 images on Wiki didn’t look anything like the funeral Lincoln.

Hmm, maybe the Chinese copiers next door to North Korea had done the deed. Back in the 1990s, the Peoples Republic of China (PRC) purchased several Panther chassis from Ford’s Wixom Plant for the underpinnings of Red China’s own Red Star limousine. But the photos I’ve seen of Red Stars likewise are nothing like Lincolns—indeed more like Crown Vics. This is not surprising since Ford’s Panther platform was used for over 30 years for Lincoln Continental, Mercury Grand Marquis and Ford Crown Victoria cars, production of which ended just a few months ago.

Could Kim’s last ride have been legitimately purchased through a proxy, I wondered.

So I contacted a long-time acquaintance and fellow Ford lifer who has worn two relevant hats over the course of his years, one-time President of Ford of Japan and more recently head of the Lincoln car-collector club. He shall be nameless here, but this is what he responded to my query:

Good guess on the Lincolns in North Korea. At least one of the Japanese Ford dealers (and perhaps more) was rumored to be occasionally selling a small number of Ford vehicles to the North Koreans through an intermediary although we never caught him at it. We generally viewed that once a vehicle was legally sold into the Japanese market its subsequent use and disposition was the concern and responsibility of the purchaser.

When I saw the Kim procession, I assumed that a Japanese Ford dealer was the source of the Lincolns. As I recall, the export to North Korea was not legal under Japanese law; however…

Ford’s Wixom Assembly Plant near Detroit didn’t build stretch limos in the 1970s. The Kim car no doubt started at Wixom and then had the custom body added at a Chicago or Cincinnati company specializing in such conversions.

I now have to wonder if Kim’s youngest son and designated heir to the NK dictatorship realizes how many mega-dollars this 30-plus-year-old classic might be worth in the hands of one of America’s car auctioneers?