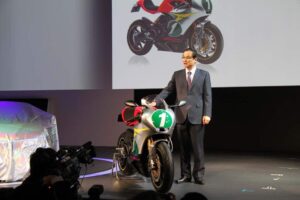 Normally one of the darlings of the automotive world, Honda has taken a number of missteps in recent months while also being slammed by a series of challenges ranging from lopsided exchange rates to earthquakes in Japan and flooding in Thailand.

CEO Takanobu Ito is taking “ultimate responsibility” for at least one of the most serious of those problems, the controversial and frequently criticized design of the latest Honda Civic, which has been slammed by such traditionally Honda-friendly folks as Consumer Reports magazine.

“Ultimate responsibility rests with me,” said the boyish-looking chief executive during a small media roundtable during the Tokyo Motor Show.  The need to respond to the criticism of the Civic – which is expected to result in an unusually quick update of the compact line – “also rests with me and we are working out what responses to take as quickly as possible.” 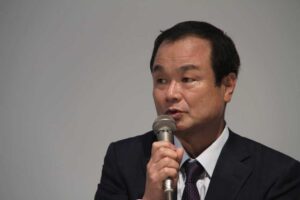 During the roundtable and a series of additional meetings this week senior Honda officials acknowledged they have a variety of challenges ahead of them that must be addressed, though at times they downplayed the severity of the problems.

The 2012 Civic has taken arguably more criticism, especially considering its role as one of Honda’s most important product lines, but other models, from the latest Insight hybrid to the sporty CR-Z and quirky CrossTour have also been targets.

Mixed, and sometimes negative, reviews have taken their toll.

“Some of the sales results (for recent new models) have been quite a disappointment,” acknowledged  Tetsuo Iwamura, CEO of American Honda, “especially the CrossTour.”

But Iwamura defended the latter, slow-selling model which is based off the same platform as the maker’s core Accord.  The problem, he insisted, was more one of a bad choice in naming than anything to do with the unusual design of the new model.  Starting with the 2012 model-year, it will now be called simply the Honda CrossTour rather than Accord CrossTour.

As to the Insight and CR-Z hybrids, Iwamura insisted they “will be more competitive in the future.”

Over the course of several days, Honda officials tried to show what they are doing to address product problems.  Among other things, that will require them to upgrade interior issues, critics deriding some recent offerings for migrating to cheaper plastic finishes than Honda was traditionally known for.

Meanwhile, the maker lifted its corporate kimono to reveal an array of new powertrain technologies, from advanced plug-in hybrids and full battery-electric drivelines to advanced gasoline engines with direct injection and other technologies that can both boost performance as well as sharply enhancing fuel economy.

Some of Honda’s problems have been beyond the company’s immediate control.  It has lost hundreds of thousands of units of production due to the March earthquake and tsunami that struck Japan, resulting in serious parts shortages.  Then, a month ago, when it appeared things were finally back to normal, however, flooding in Thailand resulted in further shortages and production delays.

But Iwamura revealed that “We have resumed our production up to full level as of November 29th. So, we will have enough production from now on and we’re ready to be very aggressive in the marketplace.”

He denied that Honda will try to buy lost sales and market share back by ramping up incentives, however.

Complicating matters, the Japanese yen has risen to a record high against the dollar, reaching levels few predicted possible in recent weeks. That is making it increasingly difficult to earn a profit on vehicles built in Japan, acknowledged CEO Ito.

“To be honest, we have not been able to keep up with all the changes happening in the environment around us,” he conceded during his Tokyo Motor Show roundtable.

One way the exchange rate issue will be addressed is by “asking the U.S. (and other regional operations) to take on a lot more,” said Ito.  Separately, American Honda chief Iwamura noted, “There is a good chance we could increase exportation from the U.S.”

Honda wouldn’t be alone in taking advantage of the increasingly competitive position of American manufacturing.  Toyota, for example, recently announced it will shift to the States production of minivans bound for the Korean market, among other moves.

Ito stressed that he does not want to abandon Japanese production, but the percentage of vehicles produced on the home islands for export could drop from 30% to as little as 10% — which would require the maker to find ways to boost demand for its products in Japan if it wants to maintain current production levels.

During his interview, Ito said one of the biggest efforts of his tenure is focused on the struggling Acura brand, noting that, “to be honest we are not satisfied (with). We want the Acura brand to be more unique and sporty.”

The maker is planning to address that with a mix of new models, improved powertrains and possibly by addressing design issues such as the controversial, shield-like grille used on the current Acura line-up.