Volkswagen Nils Concept One of Many Odd Microcars Coming to Frankfurt. 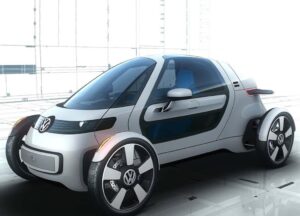 How small is too small? That seems to be one of the challenges that automakers are taking on as they prepare to roll out a flood of microcars during the upcoming Frankfurt Motor Show.

There are four-seaters not much bigger than the Smart fourtwo, two-seat concepts that turn to tandem seating to deliver an even smaller profile, and for those that are happy going solo, Volkswagen will officially unveil the pod-like Nils.

The VW Nils concept is about 20 inches shorter than the Up!, the new microcar that the German maker will soon put into production, the smallest offering in its line-up.  The face of the new show car is designed to be easily recognized as a Volkswagen but it features some interesting new touches, including the gullwing doors and the black surround that integrate front and rear bumpers.

It’s not the first time we’ve seen an automaker propose what might be called the ultimate in truly personal transportation.  Over the years, Toyota has come up with some truly quirky one-seat designs at the Tokyo Motor Show – an event famous for its strange machinations.  The most recent from the Japanese maker seemed to take inspiration from the ubiquitous Japanese vending machines, dispensing its occupant almost like a package of gum.

By that measure, the VW Nils is almost conventional in design, though that word will not likely be thrown around much at the Frankfurt debut. 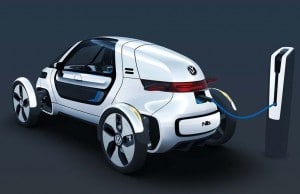 The Nils features such safety technology as City Emergency Braking.

The lightweight, all-aluminum construction and sleek aerodynamic shape are intended to maximize mileage for the electric drive system by reducing wind drag and weight.  The VW Nils weighs in at a miniscule 1,000 pounds.

An electric motor powering the rear wheels, makes 34 horsepower, enough to launch it from 0 to 60 in under 11 seconds, with the top speed rated at 80 mph.  Range for the VW Nils is claimed to be 40 miles per charge of the lithium-ion batteries.  While specifics aren’t available, the 2-hour charge time would suggest the pack is likely sized at somewhere around just three to four kilowatt-hours.

To underscore that small can be safe, the Nils concept features a similar emergency braking system to the well-reviewed system on a number of new Volvo models.  It will bring the vehicle to a fast stop, if it senses a collision, from speeds of up to 20 mph.

A portable navi device can be plugged in or out and also operates the rest of the VW Nils’ electronics.

Is the idea of a single-seater viable? VW research suggests 74% of German commuters travel less than 30 miles a day, and 90% travel alone.  Whether they’d be happy in a car like this remains to be seen, however.

*Click Here for more on the Audi Urban Concept.

*Click Here for a look at Opel’s 2-seat electric.

*Click Here to see the Audi A2 show car.