This Supercar Is No Snake (But It Is a Reptile) 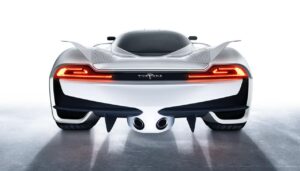 Shelby SuperCars named its new car the Tuatara, in part because of the rear winglets.

SSC announced Monday that it will build the Tuatara, the successor to the Aero and Ultimate Aero supercars, which went back and forth with version of the Veyron for the title of world’s fastest production car.

Named for a New Zealand reptile, the name translates to “peaks on the back” from the native Maori language. SSC says the name is fitting for the car, which has small winglets on the back. A bit of a stretch, but OK.

SSC founder, chief designer and CEO Jerod Shelby says there’s another link between the reptile and the car. The company says that the reptile has the fastest-evolving DNA in the world, a trait it shares with the new Shelby Supercar. 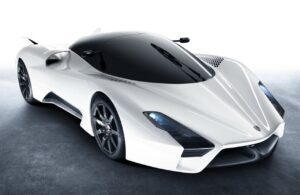 The Shelby Tuatara will have a 7.0-liter twin-turbo V-8 making 1,350 horsepower.

“After only three years in production with the Ultimate Aero, SSC’s Tuatara is about to monumentally evolve in the areas of sophistication, design, aerodynamics and shear all‐around performance,” Shelby said. Shelby is no relation to that other famous Shelby in the automotive world, Carroll.

“We felt that the fastest evolving DNA was a perfect definition of SSC’s latest project.”

SSC, based in West Richland, Wash., says the car will have a carbon fiber body and additional carbon pieces in the structure, along with aluminum crash structures. It will even have one-piece carbon fiber wheels. 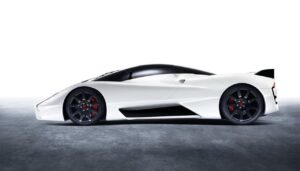 The Tuatara will be made mostly of carbon fiber with aluminum safety structures.

So, how about that battle with the Veyron? SSC isn’t making any bold performance claims, but there’s little doubt it will be looking to wrestle the fastest-production-car crown from Bugatti. The 256-mph Ultimate Aero held the title until the Veyron Super Sport recorded 267 mph.

As for price and availability, Shelby isn’t saying, but expect a very limited production run with a price pushing $1 million.