“We have to target a very different sort of buyer.” 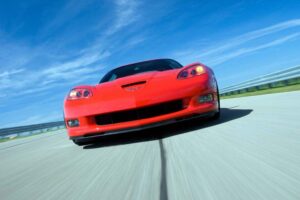 Coming at you: GM will adopt a European-style, small-block, turbocharged V8 for the next-gen Corvette.

This exclusive report (c) TheDetroitBureau.com.  It has been updated to reflect additional details.

Anxious to attract the sort of high-performance buyers increasingly drawn to European sports cars from the likes of Porsche, Ferrari and Lamborghini, General Motors is planning some major changes for the next-generation Chevrolet Corvette – starting with a high-revving, small-displacement powertrain, that will substitute for the big V8s traditionally found under the hood of the Chevy 2-seater.

TheDetroitBureau.com has learned that GM has approved the use of a very European-style V8 that will be only slightly larger than 3 liters in displacement.  The engine will be of an overhead-cam, rather than traditional overhead-valve design, using a dry sump oil system that’s particularly well-suited to high-performance road courses rather than straight-line acceleration. The engine is expected to feature a narrow 80.5 mm bore and a long stroke, more like a Ferrari or Lamborghini powertrain than the approach used for traditional Motor City metal.

A very senior GM executive also confirmed that the new engine will be turbocharged, which will help yield a broad torque curve and maximum performance under a variety of driving conditions.  The engine is expected to deliver in excess of 400 horsepower, which means a specific output in the range of 125 horsepower per liter.  That’s the sort of number that would help the next-gen Vette stack up well against the likes of a Porsche 911 or Lamborghini Gallardo.

The engine is likely to be extremely high-revving, perhaps climbing to a near-Formula One-class 10,000 RPMs, suggested one source involved in the project.

The revelation tracks in line with a recent comment by General Motors’ North American President Mark Reuss, who recently promised that the so-called C7 Corvette, due to market in less than two years, will be “completely different” from the very American sports cars that have come before it.  Since its launch in 1953, Corvette has been governed by the philosophy, “there’s no replacement for displacement.”

While Reuss and other senior executives have declined to discuss plans for the next Corvette publicly, several well-placed sources have given TheDetroitBureau.com a good sense of what’s to come.  The small V8 underscores what one of those insiders says is the desire to “target a very different sort of buyer for the next Corvette.  Let’s face it, the current customer is getting old.”  But without making significant changes, that source acknowledged, younger sports car fans will continue to be “conquested” by more modern, high-tech imports.

Significantly, Corvette won’t abandon its more classic powertrain roots entirely.  There will be several different types of engines offered for the C7, including a more classic, big-block OHV V8 designed to appeal to traditionalists.

In fact, some of the design cues of the new car will be borrowed from early generations.  There have even been rumors of the C7 going with the split window of the very collectible 1963 Corvette, though TheDetroitBureau.com has not been able to confirm that detail has been given the go.

Meanwhile, expect the interior to be much more modern than the current car’s, which GM’s global design chief Ed Welburn admits, “is a disappointment.”  The styling boss, a long-time Corvette fan himself, says he is personally overseeing the development of the C7 interior and promises it will be “absolutely world-class.”

Adopting a mid-engine layout, rather than the long-running front-engine design, is considered a strong possibility, though it would be a significant engineering shift for GM.  Nonetheless, sources say that wouldn’t be entirely out of line, as the Corvette has often served as the technological test bed for the maker.

GM adopted the then-radical approach of using a fiberglass body when the original 1953 Corvette was launched.  The sports car has introduced plenty of other features, over the years, including the MagneRide suspension, which uses a magnetically controlled fluid to continuously vary suspension settings to match road conditions and driving behavior.

When migrating from the fifth-generation Corvette to today’s C6 model, GM trimmed weight and brought the sports car’s overall size down to something closer to that of a current Porsche 911.  Anticipate further cuts in mass for the upcoming remake of Chevy’s halo car.

GM is investing $131 million in the Bowling Green, Kentucky plant that produces the Corvette to prepare for the C7 launch.

The use of the new small-displacement V8 is likely to have some knock-on effects at GM, said one of TheDetroitBureau’s sources.  As with current Corvette powertrain technology, the high-tech engine will find its way into the Cadillac line-up, it appears, where it would help that brand’s V-Series evolve into a more sophisticated offering, rather than the brute-force line-up it is today.

The switch to a smaller, turbocharged V8 isn’t exclusive to GM, incidentally.  Ford made the move with its big F-Series pickup for 2011, offering a downsized EcoBoost twin-turbo V6 — which delivers the same sort of towing power as the F-150’s biggest V8, while yielding significant fuel economy improvements.

Mike Levine, a contributor to TheDetroit Bureau.com, and editor of PickupTrucks.com, contributed to this report.