Is Lincoln Ready for a Remake? 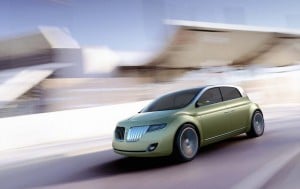 Lincoln will likely update the Concept C show car for the L.A. Auto Show, later this year, possibly with a battery drivetrain.

With only two brands to focus on, senior Ford Motor Co. managers are getting itchy to rebuild the long somnambulant Lincoln marque – and are reportedly working on a wide array of new offerings that could eventually turn Lincoln into a truly global brand.

Sources say that Lincoln desperately needs the product infusion if it hopes to survive.  With the elimination of the long-struggling Mercury division the luxury brand needs to be than just a me-too clone of Ford products gussied up with leather seats and fancier electronics.

A good indication of Lincoln’s global aspirations could be seen in the Concept C, the show car first unveiled at the Detroit Auto Show, last January.  Based off the C-segment architecture used for the 2012 Ford Focus re-make, the Concept C takes aim at one of the fastest-growing segments in the global luxury market.

With a production model under consideration for mid-decade, Automotive News reports an update of the Concept C will make an appearance at the Los Angeles Auto Show, next November.

A separate source suggests that Lincoln may highlight the possibility of powering the Concept C with a version of the Focus Electric battery-powered drivetrain.  The version of the show car seen in Detroit was powered by a 4-cylinder 1.6-liter version of the Ford EcoBoost engine.

Lincoln is betting that by the time it would bring a production C-segment model to market even American luxury car buyers will be downsizing – the same strategy behind the Cadillac ATS.  Slotting below the current CTS model, that compact offering will be part of Cadillac’s pitch to overseas buyers.

But Lincoln isn’t limiting itself to the entry end of the luxury spectrum.   Our colleagues at Autoblog report that the maker is also exploring the possibility of launching a performance brand-within-a-brand – no surprise considering the popularity of the BMW M-Series, Mercedes-Benz’s AMG, and closer to home, Cadillac’s V-line.

Former Ford product development chief Phil Martens was viscerally opposed to the idea – and also put his thumb down on the once-booming Ford SVT – but despite concerns about $4 gas, company officials recognize there’s a niche for performance, especially among luxury buyers who might pair a BMW M3 with a more practical X3.

Lincoln already has received a reasonably warm welcome for the EcoBoost-powered MKS, the answer to the Ford division’s Taurus SHO.  Meanwhile, the maker has toyed with a manumatic gearbox on the new Fiesta, so it could very well boost turbo boost on both its 6-cylinder and 4-cylinder EcoBoost engines, go for a true performance-oriented double-clutch gearbox, suggests Autoblog, and start competing more directly with the Ms, Vs and AMGs.

Farley stressed that technology will be “the essence of the (Lincoln) brand,” and he was clearly talking about more than just the new LincolnMyTouch infotainment system.