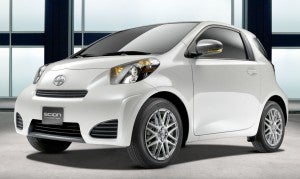 The Scion iQ, first shown at the 2010 NY Auto Show, has been delayed due to the ongoing Japanese parts shortages.

Scion has put an indefinite hold on plans to launch the new iQ minicar, putting the blame on the ongoing shortage of Japanese-made parts.

The iQ, sold in Europe under the Toyota brand, will be one of the smallest products on U.S. roads once it finally reaches production.  The Scion brand had hoped it would be able to take advantage of mounting concerns about rising fuel prices – but the launch was caught up by another major event that has shaken the global auto industry.

Toyota’s home market plants lost a full month of production – equivalent to more than 250,000 vehicles — after the March 11 earthquake and tsunami that devastated Japan and the subsequent nuclear crisis.  Meanwhile, with a number of key suppliers still out of action, the maker and its various divisions have only been able to resume production in Japan at half speed.  And until June 3rd, North American plants will operate at barely a third of their capacity.

So, acknowledged Scion General Manager Jack Hollis, “The iQ launch will be later than we originally planned.”

How late?  A senior company source said the situation is simply too “fluid” to be able to determine when the maker can resume normal operations, though it is hoping to get back up and running sometime in the third quarter of 2011.

The four-seat iQ is meant to “define a new premium micro-subcompact segment,” explained Hollis, during a news conference at the 2011 New York Auto Show.

The microcar will be equipped with a variety of more up-market features than the classic econobox.  That’s especially true in the safety category, where Scion will have to overcome concerns about driving such a small vehicle on U.S. roads dominated by SUVs and other light trucks. The iQ will have 11 airbags, for example, including the world’s first rear window curtain airbag, designed to minimize injuries in a rear-end collision.

The U.S. version of the Scion iQ was first shown at the 2010 New York Auto Show.