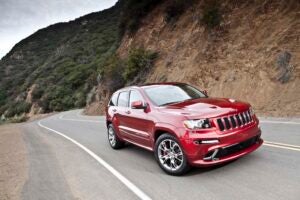 A sure sign of the automotive industry’s recovery is the return of the pointless car.

The pointless car—or SUV—is a vehicle that is built to excess, just because the automaker can. Generally high on fun and low on practicality, the pointless car/truck/SUV exists so that high-dollar customers can have something fun to drive on the weekend.

Really, no one needs a Jeep Grand Cherokee SRT8. But that won’t stop Jeep from building one.

When the Grand Cherokee was redesigned last year as a 2011 model, it was almost a foregone conclusion that a new SRT8 model would eventually hit the market. And so it is that Jeep officially took the wraps off of the 2012 Jeep Grand Cherokee SRT8 at the 2011 New York International Auto Show.

Powered by a 6.4-liter Hemi V-8 that makes 465 horsepower and 465 lb-ft of torque, the SRT8 is expected to reach 60 miles per hour from a stop in a time of 4.8 seconds, according to Jeep. Jeep also projects a mid-13 second quarter-mile time, a 0-100-0 time of around 16 seconds, a 116-foot stopping distance from 60 miles per hour, and an electronically limited top speed of 155 miles per hour. Handling hasn’t been forgotten: Jeep is claiming a skidpad number of .90G.

Drivers can manually change the SRT8’s dynamics by selecting one of five modes: Auto, Sport, Track, Tow, and Snow. Auto is fairly self-explanatory—the computer does all the work. Sport adds, well, a touch of sportiness to the proceedings, while Tow, naturally, sets the vehicle up for towing.

Continuing with the obvious, the Track mode firms up the suspension for track duty, while Snow works to keep the SRT8 on-road when the white stuff flies.

Jeep’s Quadra-Trac four-wheel drive system is standard, and it can transfer up to 100 percent of all available to torque to one of the rear wheels. The computer can also anticipate quick throttle inputs from a stop, with the idea of preventing wheelspin before it occurs.

That same transfer case proportions torque between the front and rear, and the SRT8 also has a fully hydraulic steering system with a heavy-duty pump and pump cooler.

The 2012 Jeep Grand Cherokee SRT8 rides on 20-inch wheels and tires, and stopping power is provided by Brembo brakes (15-inch vented rotors up front and 13.8-inch in the rear) with 6-piston calipers in front and 4-piston calipers out back.

Outside of the one-inch lowering, the SRT8 gets other unique exterior cues, such as body-color wheel flares and side-sill cladding.

There’s also a new front fascia with LED daytime-running lights to go along with a body-colored grille, a black lower grille, and an under-body belly pan with built-in brake ducts. A new sculpted hood has built-in heat extractors.

The rear has a new one-piece fascia, an air diffuser, and a liftgate-mounted spoiler. A dual-exhaust system has 4-inch tips.

Inside, Jeep has added a heated leather steering wheel with a flat bottom and a screen that gives drivers performance data. That same steering wheel has paddle shifters for the transmission.

There are carbon-fiber accents in the cabin, and Nappa leather and suede seats, with SRT logos embroidered into the front seats. The front seats are heated and cooled, and the rear seat is heated. There’s also a premium audio system.

For those with fuel-economy concerns, the SRT8 has a fuel-saver system and an active-valve exhaust system. Jeep estimates a maximum range of 450 miles. The SRT8 will be able to tow up to 5,000 pounds.

All hail the return of the pointless SUV.