Supercar will hit 60 faster than you can pronounce its name. 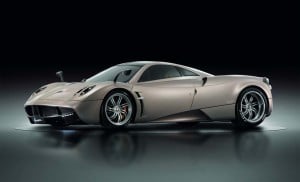 Italian supercar maker Pagani is finally set for a U.S. debut with the upcoming launch of the Huayra.

Who says it’s the year of the electric vehicle?  That was so, well, January.  Anyone who attended the recent Chicago Auto Show knows the spotlight has shifted to performance, with the Windy City preview of the Dodge Charger SRT8 and Camaro ZL1.

For someone with the money and desire to have something more exclusive – and quicker yet – Pagani is ready to step in.  And, yes, for those who’ve been following the Italian supercar company, founded in 1992 by former Lamborghini executive Horacio Pagani, the Modena-based maker is finally ready to launch itself into the U.S.

Though you’ll find a few of the old Zondas in the States, they were never formally distributed here, but Pagani plans to set up a formal dealer network now – though we’ll have to wait for specific details.  The good news is that the company’s latest engineering marvel, the Huayra, will arrive sometime this year. 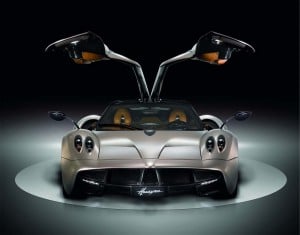 The Huayra, with its carbon-titanium body and gullwing doors, will weight in below 3000 pounds.

While we will likely get some sharp rebukes from Pagani fans, the best way to picture the new supercar is to think of the McLaren MP4-12C.  The exaggerated and extremely slippery body, with its gullwing door layout, will be made of carbon fiber, as will the chassis, making use of Signori Pagani’s skills, honed during his time at Lamborghini.

All told, the company promises the Pagani Huayra will weigh in at less than 3,000 pounds – which translates into one blinding power-to-weight ratio when you factor in the 2-seater’s 700-horsepower, 100 NM torque twin-turbo V12.

“We are thrilled at the opportunity to represent the Pagani brand in the United States and we look forward to the successful launch of the Huayra,” said Horacio Pagani, the company founder. “This automobile is the result of five years of dedicated effort from the Pagani team and we see this as an unprecedented opportunity to continue expanding our vision of the future for the supercar industry.”

“We are thrilled at the opportunity to represent the Pagani brand in the United States and we look forward to the successful launch of the Huayra,” said founder Horacio Pagani. “This automobile is the result of five years of dedicated effort from the Pagani team and we see this as an unprecedented opportunity to continue expanding our vision of the future for the supercar industry.”

The name, incidentally, comes from Huayra Tata, an ancient god of wind.  Bringing the new car to production required five years of work, Pagani says, much of that devoted to aerodynamic development.

Specific performance numbers are also being held back “for a later date,” Pagani says.

Considering the performance of the company’s prior model, they will have to be spectacular.  The old Zonda holds a number of track records and was honored by, among others, Top Gear, which declared the Zonda R version 2010 Car of the Year.

Oh, and as to pronouncing the name, sources vary, though WIE’-ra appears to be the favored choice.