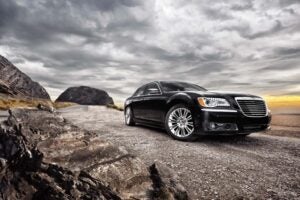 The 2012 Chrysler 300 will reach showrooms earlier in the first quarter of the new year.

Was it worth the wait?  Chrysler is finally giving us a full glimpse of the next-generation 300 sedan – after offering up only a tempting tease earlier in the month.

The images here reveal a retro-futuristic design that picks up where the outgoing sedan left off.  Launched in 2004, the Chrysler 300 flagship offered a dramatic rear-drive design that helped carry Chrysler through some of its darkest moments – including last year’s bankruptcy.

The new car will have to prove that beauty is more than skin deep, however, and that means delivering more technology, improved quality and, in particular, a more refined and crafted interior.

The front end of the new 300 features an every-so-slightly more raked grille, one that uses a new seven-blade design featured in what Chrysler describes as “liquid chrome.”  Meanwhile, “key slot” headlamps form a C-shape and are surrounded by LED daylight running lamps. 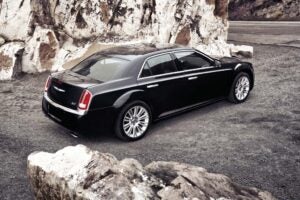 The look of the new Chrysler 300 is familiar yet more refined than the outgoing model.

From the side, the familiar, very upright silhouette of the earlier 300 is maintained, albeit with more sculpted details, including fenders and hood.  The windshield is a bit more raked, and the pillars are slightly thinner, improving both aerodynamics and visibility, Chrysler claims.  A new dual-pane panoramic sunroof doubles the visibility of the old sunroof.

The rear end features a new lip spoiler above the all-new Chrysler logo.  More stylish LED taillamps are paired with distinctive “light pipes” to add a strong presence at night. 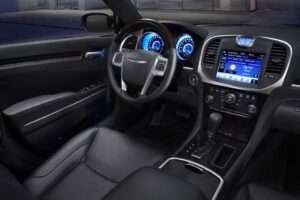 Soft blue lighting accents the interior of the 2012 Chrysler 300 at night.

The interior – which appears to wrap around the large, 8.4-inch uConnect touch screen monitor – features a new 1-piece instrument panel similar to what Chrysler is rolling out on other new models.  The approach is designed to not only improve its appearance but to enhance both perceived and actual quality.

The maker is holding some details close to the vest to encourage we media types to attend its preview at the upcoming North American International Auto Show.  One critical question concerns the 300’s powertrain line-up.  Indications are that Chrysler will maintain a mix of powertrains, starting with a 292-hp V6, along with the 5.7-liter Hemi V8.  We’d also bet on the return of the 300 SRT8 performance model, as it would help maintain the sedan’s position as the Chrysler flagship.

Chrysler has finally put a timeline on the new model, revealing that prouction will begin shortly at the maker’s assembly plant in Brampton, Ontario, with the first of the 2012 Chrysler 300 sedans rolling into showrooms later during the first quarter of next year.

(For more pics and details, Click Here for TheDetroitBureau.com’s earlier preview of the 2012 Chrysler 300.)