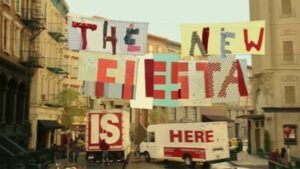 Everyone who watches television is subject to commercials — yes, even on PBS — which means everyone is a television commercial critic and at least self-styled expert. This fact, comes much to the chagrin of the professional ad critics, ad agency creative’s, account people and assorted media mavens; no matter who praised the commercial or campaign, it’s the consumer whose voice and vote rules.

As they did this week at the L.A. Auto Show, where the first Nielsen Automotive Green Marketer of the Year Award (NAGMYA?) was presented to Ford. Consumer response, this past year, has been strong for key campaigns for both the subcompact Fiesta and Fusion hybrids.  Ford also scored by running those efforts as part of its sponsorship of American Idol.

“This award is for the auto marketer who was most effective at leveraging its brand to further the ‘green’ movement and create positive awareness for all the auto industry is doing to drive fuel-efficiency and eco-friendly practices,” Lois Miller, president of Nielsen Automotive said.

Nearly 7,000 U.S. consumers were surveyed using three studies: a cross-media survey, separate analyses of data on TV advertising and effectiveness, and social media buzz, all then analyzed for awareness levels and perceptions for ‘green’ vehicles.

The top five, as measured by consumers, in addition to Ford were: Chevrolet, for the Volt (which won the Green Car of the Year Award also handed out at the L.A. show). Honda, Mercedes-Benz for the S-400 diesel electric hybrid and Toyota for the reinvigorated Prius commercials.

All have strong association with green technology and solid brand awareness.

Noticeably missing was the warm and fuzzy Nissan Leaf’s Polar Bear commercial, which I have personally praised and still like. It’s obvious, though, while consumers and ad types generally did like the Polar Bear campaign — and Nissan claims the data shows they did —  the brand name recognition and awareness of the Leaf name did not resonate with the Nielsen panel of 7,000 respondents.

There’s a new follow-up commercial for the Leaf, which is scheduled to start later this month.  It will be interesting to see if this commercial will generate better consumer awareness of the brand and model names: Nissan and Leaf.