Bringing back the panache, swagger…and styling. 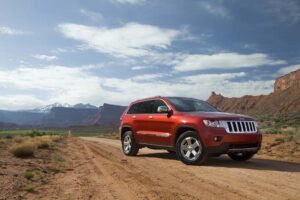 The boxy look is gone with the all-new 2011 Jeep Grand Cherokee.

Jeep has always had a certain panache and swagger that reaches all the way back to the original off-roaders that American soldiers fell in love with during World War II.

For decades, that gave the Chrysler brand a leg up over its competition, so much so that it often had to remind folks that Jeep wasn’t synonymous with SUV.  But something happened in recent years, and the awkward and ungainly design of the last-generation Jeep Grand Cherokee, the brand’s flagship, didn’t help.

Now comes an all-new update, and during a couple days of driving through Northern California, we were pleased to discover that Chrysler has managed to endow the 2011 Jeep Grand Cherokee with the sort of refinement and style that is going to impress potential buyers and make competitors wary.

In an era when more and more makers are moving away from classic sport-utility vehicles in favor of car-based crossovers – as Ford will do with the launch of the 2011 Explorer – Chrysler has held firm with the hybrid unibody/truck approach its used on all versions since the original Grand Cherokee.  That means the 2011 Jeep retains its impressive off-road capabilities. It can still charge over rugged country and up steep hills with the kind of agility that has always appealed to Jeep loyalists. 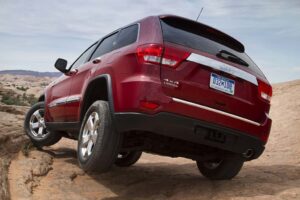 While other SUVs and CUVs sacrifice off-road capabilities, Jeep aimed to enhance both on- and off-road performance.

Chrysler has always made off-roading part of the Jeep equation down pat. In fact, the Grand Cherokee offers three different 4X4 settings, including a basic driveline providing four-wheel -drive capability without requiring the driver to push any buttons or pull any levers.

But Chrysler also has managed to embellish the off-road capability with new technology by adding what it calls a “Quadra-Lift” air suspension system.  The new system includes two different off-road settings that raise ground clearance by 1.3 inches or 2.6 inches. The front air dam also can be removed for travel in really rugged terrain.

The “Quadra-Lift” suspension also lowers the vehicle on the highway or everyday roads to help improve the new Grand Cherokee’s aerodynamics and reduce the drag and boost fuel economy. 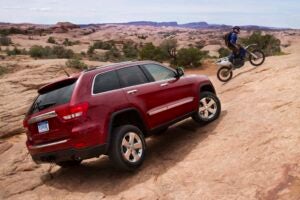 In addition, Chrysler also has a new traction response system, which lets the driver choose one of 12-different settings best suited to the terrain. The sophisticated control – similar to what Land Rover has been offering for several years — is linked to the powertrain, suspension, transfer case and electronic stability control to keep the vehicle moving in all kinds of conditions.

But the changes to the suspension and additional electronic controls also mean that the 2011 Jeep Grand Cherokee’s on road manners have also improved dramatically. I was able to underscore that difference by comparing the feel of the new ute with that of a 2010 Jeep Commander, an off-shoot of the old Grand Cherokee.  The difference was like night and day. 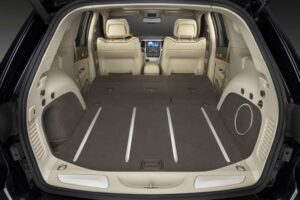 No one has ever questioned the Grand Cherokee’s all-purpose utility but the new refinements should help Chrysler appeal to customers who had preferred something with a softer feel and touch. The Grand Cherokee is both a genuine sport utility vehicle and a cross over at the same time.  That could be a critical factor in maintaining its position at a time when traditional SUVs are losing traction and even some of the Grand Cherokee’s top competitors – like the Ford Explorer – are waving the white flag and migrating to crossover platforms.

In line with the new refinement, the exterior of the 2011 Grand Cherokee has been restyled behind the trademark seven-slot grille, which is once again a Jeep exclusive now that Hummer has died. The exterior is sleeker, less boxy and more contemporary.  Standard 17- and 18-inch tires on the Grand Cherokee Laredo and Limited models are tuned for both off- and on-road driving and lower rolling resistance.

Nor has Chrysler neglected the interior, an area the maker has admittedly been weak. Instead it has regained some of its design flair and put it to work inside the 2011 Jeep Grand Cherokee, which seats five comfortably and has plenty of space for carrying luggage, sports equipment or bulky packages. 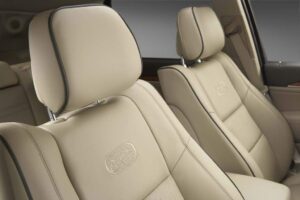 The 2011 Grand Cherokee gets some much-needed enhancements to seating and interior.

The interior is nicely laid out. With a much richer use of materials offered in different textures and including real wood and leather as well as Chrome accents.

The instrument cluster is easy to read and the 2011 Grand Cherokee also comes with a host of comfort and convenience features, including heated and ventilated seats with four-way lumbar controls, rain-sensing wipers, keyless entry, rear-back-up camera, telescoping steering wheel, LED lighting around the cabin and leather on the steering wheel and shift knob.  A dual pane sunroof is optional.

The 2011 Grand Cherokee also can tow 5,000 pounds with the standard V-6 engine, which is also all new for 2011. The new engine delivers 290 horsepower – 38 percent improvement over the V6 used in the old Grand Cherokee.  Fuel economy also has been improved by 11 percent to 23 miles per gallon; and with the large fuel tank the 2011 Grand Cherokee has a range of about 500 miles. 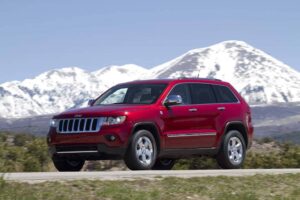 The 2011 Jeep Grand Cherokee may be able to climb every mountain, ford every stream, but it faces some tough showroom competition.

Meanwhile, the safety package in the new Grand Cherokee includes full-length side air bags, seat mounted side thorax air bags for the front and rear seats, as well as driver and passenger side airbags to absorb a full-frontal crash. The package also includes electronic assist technologies such as blind-spot detection and a forward collision warning system, as well as an all-new body capable of meeting the latest crash standards, both here and in Europe.

The new Grand Cherokee also is equipped with Bluetooth, enabling hands-free calling, and the Uconnect media center with iPod integration, Internet access, Sirius Satellite Radio and a 30 gigabyte hard drive for storing music and voice messages, as well as navigation and mapping software. In addition, the rear-seat can be equipped with Chrysler’s new Flo-TV system, which delivers live television in to the vehicle.

The market for SUVs and crossovers is crowded and competitive.  But, all-in-all, Chrysler has built a solid vehicle that should have no trouble finding buyers – while giving its competitors fits.