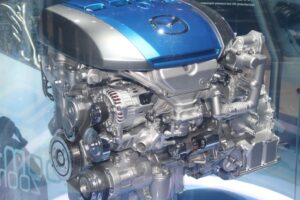 With a goal of boosting its global fuel economy 30% by mid-decade, Mazda is under pressure to deliver – and fast.  And that prompted the Japanese maker to pull the wraps off its new line-up of advanced powertrains, dubbed Sky – “which means the sky’s the limit,” said CEO Takashi Yamanouchi.

These were first revealed last year at the Tokyo Motor Show in the Kiyora concept car.

A gasoline version, dubbed Sky-G, will be the first of the new engines to reach the U.S. market, the executive announced, during a news conference at the New York International Auto Show.  Though Yamanouchi was reluctant to provide many details, he hinted it would reduce fuel consumption 15%, even while delivering an equivalent, 15% boost in performance.

The Sky-G will make its world debut in the U.S. market, in 2011 – most likely in a mid-size model like the Mazda6.

A year later, it’s to be followed by the launch of the Sky-D, a new, high-efficiency diesel that Yamanouchi said would reduce fuel consumption by 20% compared to Mazda’s current, 2.2-liter diesel.  Perhaps as significant is the plan to introduce the Sky-D to the U.S.

Mazda appears to be favoring basic work on combustion efficiency, lightweight materials, and low friction engines and transmissions, while other companies, including now minority shareholder Ford, are pursuing more expensive forced induction designs with one or more turbochargers, or expensive plug-in hybrids and electric vehicles with $10,000 -$20,000 battery packs. (See Mazda Simplifies, as Ford Complicates for a more detail analysis.) 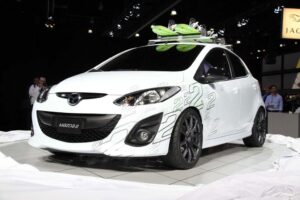 Other makers have been reluctant to bring diesels to the States, except in large trucks or high-line luxury cars, fearing buyers would not accept the premium required to cover the cost of technology that can bring diesels in line with ever-tightening U.S. emissions standards.  Yamanouchi stressed that the Sky-D will meet the next level of emissions compliance, but Mazda is not yet discussing the price penalty for doing that.

But the maker is hoping it can position the Sky-D against competitors’ hybrids by promoting the new diesel’s projected 43 mpg fuel economy.

To complement the two new Sky engines, Mazda will pair them with a new Sky automatic transmission that, on its own, is expected to yield a 5% improvement in fuel economy.  The six-speed, suggested Yamanouchi, will boast the sort of performance feel of a fast-shifting dual-clutch, electrically-shifted manual gearbox.

Along with news about the Sky powertrains, Mazda officials announced pricing for what will become the brand’s smallest U.S. offering.  The 2011 Mazda2 will launch later this year, months earlier than originally planned.  Despite a hefty compliment of standard features, including electronic stability control, a tilt steering wheel and keyless entry, the base Mazda2 will go for $13,980, with the up-market Mazda2 Touring package adding $1,485 to that sticker price.

No longer will choosing a small car mean having to choose not good enough,” proclaimed Jim O’Sullivan, president of Mazda’s U.S. operations.