A Tiny B-Sized Vehicle Will Be Built In Michigan 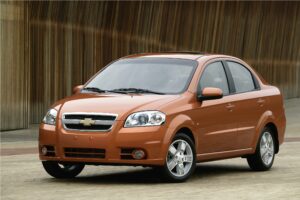 The Chevrolet Aveo and G3 Pontiac are currently imported for sale in the U.S., as are all other B-cars.

Troy Clarke, president of General Motors North America confirmed this afternoon that its assembly plant in Orion Township and stamping facility in Pontiac, both in Michigan, will build its future small sub-compact B-car and another larger C-size car, of roughly the size of the Toyota Corolla.

The volume car in the plant, at about 100,000 units annually will be B-sized, a class that includes the current Chevrolet Aveo and G3 Pontiac, which are currently imported for sale here. Other B-size cars in the U.S. include the Honda Fit and Nissan Versa, on sale for years now, as well as the upcoming Ford Fiesta, which is belatedly due next year.

This is one of the toughest most competitive segments in the world, and one that is dominated by offshore brands that have government protectionist policies, and high fuel and car registration taxes to support them.

GM is part of this global trend  that has clearly hurt the U.S. economy. GM Daewoo Auto & Technology (GM Daewoo) in May sold domestically in Korea 8,155 vehicles and exported 35,823 vehicles. Established in 2002, GM Daewoo now produces vehicles and kits for Chevrolet, Buick, Opel, Vauxhall, Pontiac, Holden and Suzuki that are offered in more than 150 markets on six continents.

Conventional wisdom has long held that American manufacturers cannot make money on small cars, especially if they are built in the U.S., where labor rates and productivity have been non-competitive with foreign, and especially Asian manufacturers. But the numerous concessions made by the union, in recent years, and recent givebacks meant to turn around the domestic industry, have changed the equation.

Chevrolets’ Avea is currently selling in the U.S. at about 40,000 units annually, a mere footnote in sales charts, and Clarke frankly admitted that GM is banking on rising fuel prices to increase demand and make the car profitable. He also said the attributes of the new — as yet unnamed B-car — would also help sales of the car, which is said to be an upgrade on the current B-size platform that is based on a Korean design from Daewoo. The new B, like its predecessors, will be built globally at “several plants.” 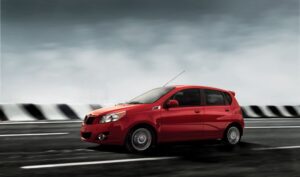 The Pontiac G3, imported from Mexico and based on a Korean platform, is another example of a B-car.

“GM will be the only automaker, foreign or domestic, to build small cars in the U.S., and we believe Orion Assembly and Pontiac Stamping are well suited to deliver a high-quality, fuel-efficient car that competes with anything in the marketplace,” said Clarke.

Key to the success of the plant is an attrition program currently underway with the UAW that aims to remove older, higher paid workers from payrolls in favor of new workers, hired at much lower wages that once were non-union job shop rates. Critics point out that this amounts to U.S. government endorsed age discrimination since the Treasury Department was instrumental in breaking the UAW contract at GM.

When the refurbished Orion plant is up and running, GM will build 70% of the vehicles it sells in  the U.S., which, based on our current estimates, would retain GM’s lead as the largest automaker here.

Timing for the retooling of both the assembly and stamping plants is still under study, but GM says work would begin in late 2010 in anticipation of the start of production in 2011, which would mean the cars could be certified as a 2012 or 2013 models. It also means that when the plants go dark this September, employees have a long wait before returning to work.

The decision rested on the successful outcome of economic incentive negotiations between GM and state and local government officials, which also included the States of Tennessee and Wisconsin.

A selection team comprised of leaders from several of GM’s functional areas, including manufacturing, labor relations and finance, made the final decision based on a specific set of criteria, said Clarke. The three states involved made “very, very good offers,” but Michigan’s was very, very, very good, Clarke said. “It’s unfortunate that we have to choose one.”

Governor Granholm of Michigan said the the cost of this action is upwards of $430 million to beleaguered state and local taxpayers, who are facing huge tax increases to balance the state budget after years of profligate management by both Democrats and Republicans who assumed the automotive manufacturing cash cow could be milked for ever. This is a very, very expensive raid on taxpayers’ wallets.

Clarke denied that politics intruded in the process that sees GM’s Spring Hill plant in Tennessee bypassed and placed on standby status this fall, home of Republican Senator Bob Corker, an outspoken critic of the domestic industry. Spring Hill, which GM invested $600 million last year to retool for large unit-body SUV production, is on the standby closing list. But clearly politics dictated the U.S. production decision in the first place, as the UAW successfully lobbied the Obama Administration to stop GM’s  plan to import the car, once it was supplying taxpayer life support.

The other plant under consideration, Janesville, Wisconsin, also stays on the standby status it was put on last May, with arguably even worse future prospects, since it builds even less fuel efficient, body-on-frame SUVs.

Cal Rapson, UAW Vice President and Director, UAW-GM Department said, “My heart also goes out to our UAW members in Janesville and Spring Hill. Our work will not be complete until all of our members displaced by the shrinking auto industry are returned to work. With today’s announcement, we can begin to restore hope that the worst of the times are behind us.”

Both plants, in theory, could be brought online at some point in the future should GM require additional capacity due to increased market demand for large vehicles.