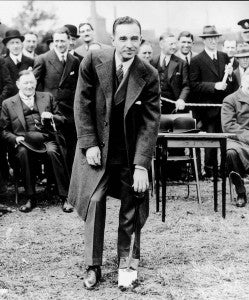 On May 17, 1929, Edsel Ford, son of founder Henry Ford, dug  into a low-lying marsh with a silver spade, to celebrate the, err, swamp-breaking beginning of an English plant outside of London that today makes more than 1 million engines annually for use in European final assembly plants.

Ford bought the marsh five years earlier for £167,700. To support the planned engine and car factory more than 20,000 piles were sunk 80 feet into the ground.

Dagenham today employs a total of 4,000 people in engine, stamping and transport operations. Ford engineers and production workers there are responsible for the development and assembly of diesel engines used in 28 different Ford, Jaguar, Land Rover and Peugeot Citroën models. Four-cylinder 1.4-, 1.6-, 1.8-, 2.0-, 2.2- and 2.4-liter units are produced alongside 2.7- and 3.0-liter V6 engines and a 3.6-liter V8. 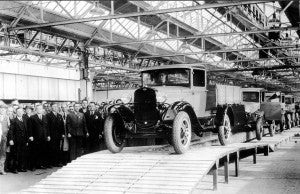 October 1931: the first vehicle off the assembly line in Dagenham, the Model AA truck.

Ford Dagenham took 28 months to build. Its first vehicle, a Model AA truck, rolled off the production line in October 1931. Special trains moved 2,000 Ford employees and their families to their new Dagenham homes from Trafford Park, Manchester – the company’s first UK plant. From 1933 to 2003 a Ford ferry transported workers from south London to Dagenham to save them the time and cost of crossing the Thames river at Dartford or Blackwall.

Both the Model AA and another pre-World War II favorite, the Model Y, are in Ford’s Dagenham heritage collection and will be driven to celebrate its 80thbirthday.

The Ford Model Y was the lowest priced saloon (sedan) ever made, with the Popular model introduced in 1935 being the first and only £100 car. An early pioneer of recycling, Henry Ford fuelled Dagenham’s power station by burning London’s waste – 2,000 tons per week until 1939. 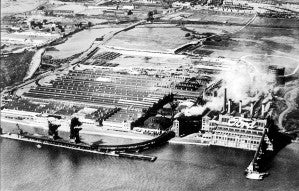 After the war Dagenham reverted to vehicle and engine production from 4×4 army trucks and gun carriers. The Dagenham-built Ford Consul and Zephyr models were shown at the 1950 motor show, leading to the expansion of the plant by 50% to accommodate resulting demand. 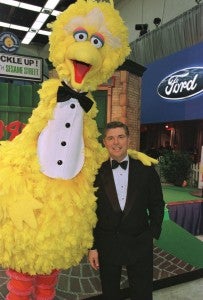 As a successful CEO Alex Trotman stoically endured many events, and put up with meddling by Ford family members.

By 1966 the original riverside building was dedicated to engine manufacturing, now making a 1.1- to 2.4-liter range. Within 20 years Ford Dagenham had secured its position as the company’s only dedicated diesel engine facility globally.

This was reinforced at the turn of this century when a second Ford Dagenham engine plant was commissioned, opened by Prime Minister Tony Blair in 2003. Called the Dagenham Diesel Centre, the £325 million investment includes the “Tiger” line making 1.6 engines for Ford’s low CO2v”ECOnetic” range.