There seems little doubt the auto industry is on a path to an electrified future. While many believe that means a shift to battery-electric vehicles, others envision a future offering a choice of alternatives, ranging from conventional hybrids up to pure BEVs. Add to the list hydrogen fuel-cell vehicles like the Toyota Mirai.

A fuel cell is essentially a refillable battery. Push hydrogen through a device called a fuel-cell stack — where it combines with oxygen from the atmosphere – and you get a stream of current to power the same sort of electric motors used in a battery-car. The only exhaust is a flow of water vapor.

Toyota is one of three automakers currently selling FCVs — fuel-cell vehicles — in the U.S., along with Honda and Hyundai. The Japanese giant is a big believer in hydrogen power and it’s demonstrating the technology’s potential with a second-generation version of the Mirai that just recently went on sale in select U.S. markets.

The new model not only adopts a new look but gets a major upgrade to its fuel-cell stack and other drivetrain components. That translates not only into better performance and longer range, but also a 20% reduction in pricing.

The 2021 Toyota Mirai strays from the Jetsons-like design of the original. Toyota is moving away from the strategy pioneered with the original Prius, sharply distinguishing its green machines with styling that often bordered on the goofy. The new FCV visually fits more easily into the overall Toyota line-up.

Compared to the original version, the second-generation Mirai is 2.8 inches longer and 2.6 inches lower. It’s also slightly wider. If anything, it’s now one of the more striking products in the Toyota line-up, with a shape that might remind you of a Tesla Model 3 — but with a decidedly more attractive back end.

The first Toyota Mirai shared the underlying Prius platform, which translated into a moderately cramped, four-seat interior. The new model shares the architecture underpinning the latest-generation Lexus LS. That provides several benefits, including improved, near 50:50 weight balance, a shift to rear-wheel-drive, and room for an additional rear seat passenger.

While you won’t confuse the cabin with that of a Lexus LS, the new Mirai is decidedly more upscale than the original. In keeping with many of the other new green machines, Toyota chose to use recycled and artificial materials for the interior. But the faux leather seats would fool those unaware – and they’re quite comfortable for a long drive.

The new MIrai’s rear-drive layout, combined with a smaller fuel-cell stack, offers a number of advantages. For one thing, the stack now is fitted under the hood, rather than under the passenger compartment where, in the original Mirai, it awkwardly impinged on cabin space.

The tanks do force some compromises in rear-seat headroom, however.

Like the original version, Mirai is powered by a fuel-cell stack, where hydrogen is combined with oxygen from the atmosphere. But the system is both more compact and more powerful, producing 128 kilowatts, up from the old model’s 114 kW output.

Beyond the source of energy, fuel-cell vehicles essentially operate like a battery car, sending power to one or more electric motors to drive the wheels. In the case of Mirai, there’s a single electric motor pumping out 180 horsepower and 221 pound-feet of torque. That makes it quicker than the old model which took a lumbering 9 seconds to launch from 0 to 60. The new model gets you there in the mid-6-second range.

With the increase in hydrogen storage, meanwhile, Mirai now yields 357 miles of range in the Limited trim, a figure that jumps to 402 miles for the Mirai XLE. The sedan gets an EPA Combined rating of up to 74 MPGe for the XLE, 65 for the Limited. One advantage of a fuel-cell system is it doesn’t suffer quite as severe a loss of range in cold weather as battery-electric vehicles do, but the numbers do drop when you approach freezing temperatures.

One of the challenges of an FCV is getting enough power out of the stack at times of peak demand. The 2021 Mirai overcomes this by also using a small lithium-ion battery that is charged up while cruising or coasting. (The old model had a smaller nickel-metal hydride battery.)

One goal the automaker set for the FCV was “raising the bar for standard technology” with features like a standard 12.3-inch touchscreen for its infotainment system and a 14-speaker JBL sound system. There’s also Apple CarPlay and Android Auto, as well as built-in Amazon Alexa compatibility. The standard-issue JBL audio package, meanwhile, positions 14 speakers around the cabin. Also standard on the XLE grade is Qi wireless smartphone charging.

The gauge cluster, meanwhile, is an 8-inch TFT display. One disappointment: the lack of a conventional volume control knob. In fact, the entire interface could use an upgrade. It is far from intuitive and takes time to get comfortable with.

The new Mirai also got an upgrade to the Toyota Safety Sense 2.5+ suite of advanced driver assistance systems.

And moving up to the XLE grade adds useful features like a head-up display, three-zone climate control, and a bird’s eye camera view.

The big disadvantage of a fuel-cell vehicle is the lack of a hydrogen production and distribution infrastructure. That’s why Toyota — like its competitors — has limited sales of the 2021 Mirai largely to portions of California where pumps can be found.

The technology also is costly. Even though the second-generation model came down a bit, it starts just under $50,000, with a Limited coming in at $66,955. But the price is partially offset by the fact that Toyota will cover up to $15,000 worth of hydrogen, on top of an 8-year/100,000-mile warranty on the fuel-cell powertrain,

The driving experience, meanwhile, is quite pleasant. While nowhere near as fast as some of the latest battery-electric sedans, the 2021 Toyota Mirai is acceptably quick off the line, and the launch feel doesn’t fade as you approach 30 mph, a problem with earlier fuel-cell vehicles.

Like an EV, the system is uncannily quiet while cruising, with only a slight, wind-like rush during hard acceleration from the pumps feeding the fuel-cell stack.

Handling seems solid, though our first drive didn’t offer the opportunity to really challenge the steering and suspension. Still, the more evenly balanced weight distribution should be promising once we have the opportunity to clock more miles.

Bottom line, the 2021 Toyota Mirai marks a major improvement from the original fuel-cell vehicle. But for the limited availability of hydrogen gas, the new FCV could readily serve as a daily driver with lots of premium features. Like battery chargers we expect to see more pumps open in the coming years. And, if the second-gen model is any indication, fuel-cell technology really could provide a real alternative to battery-electric vehicles. 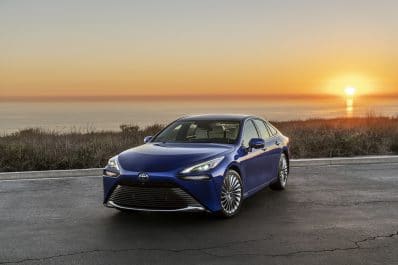