An all-wheel drive minivan? Perfect for a snowy February drive.

Few vehicles are as practical as a minivan. It really can be almost all things to all people – except a sports car. The horsepower can be bulked up, but the ride and handling is never quite right. However, it seems that the do-it-all nature of these vehicles played a role in their declines popularity.

That is until recently. There’s a been a bit of a renaissance in the “station wagon of the ’90s” segment of the industry. The Honda Odyssey is what it always is: excellent and it battles for the top spot with the now Chrysler Pacifica.

More and more automakers are putting some real effort into their minivans. Kia revamped their latest version, even giving it a new name: the Carnival. What used to be the Sedona now gets the same moniker as everywhere else the South Korean automaker sells it in the world.

The Toyota Sienna also got a nice update for the new model year, with an exterior update as well as all-wheel drive. In fact, the Chrysler Pacifica gets it too for 2021. If you’ve got all-wheel drive and room for eight/a 4-foot by 8-foot sheet of plywood, what you need that silly large SUV for?

The Chrysler Pacifica is leader of the minivan pack, which until recently was about as impressive as it sounds. However, as sport utes continue to get more expensive, families looking for room and value are returning to their childhood: minivans. What they’re finding is a vehicle way beyond what hauled them to and from soccer games and Sunday dinners at Grandmas.

Of course they’re loaded with infotainment technology and roll with 5G connectivity. But what some of them also enjoy is all-wheel drive. That capability often meant the difference between buying a big, burly ute or an 8-passenger mom mobile. The 2021 Chrysler Pacifica bridges that gap, now offering an all-wheel drive model.

More importantly, in the middle of my week behind the wheel, Mother Nature dumped a good amount of snow on southeastern Michigan giving me the chance to put it to the test. It didn’t just pass, it’s the class valedictorian.

Often reviewers get to write about flowing lines or large rear haunches on a vehicle. Let’s eschew all of that for the 2021 Chrysler Pacifica. Rarely does anyone say, “That minivan is beautiful!” But they will comment on how an ug

ly one is if the styling’s off. Not a problem with the Pacifica. It’s clean. It’s crisp. It simply makes sense. If you plan to carry a soccer team (my kids played travel soccer, there’s not going to be a baseball reference in here – anywhere), you need a big rectangle sporting a sloping front end to cut through the wind to improve fuel economy.

On that front, Chrysler designers checked the box. The Pacifica is an appealing package, engendering feelings of comfort, safety and, yeah, a bit of performance. It’s a nice looking vehicle. I have three kids, but I take exactly none of them to any kind of practice or school event any more as they can drive themselves – and in the case of the oldest, her own child. All of that said, the exterior is appealing enough that I’d consider buying one.

To that end, FCA designers believe they’ve given it a “more SUV-like” look for 2021. Pffft. Stop telling the world a minivan is an SUV. It’s not and that’s not a problem. First of all, no one believes it and secondly, still no one believes it. You can try to butch it up all you want, but it’s a minivan. Be proud. It’s a good one!

Let’s be honest, it’s on the inside that a minivan needs to shine or no one cares. If the cabin’s cruddy, it’ll sit on dealer lots forever. Awash in leather and soft-touch materials, the Pacifica is no one’s lot sitter. With plenty of windows, comfortable seats, room for at least seven, it’s a haven on wheels. I found myself sitting in the driver’s seat for the better part of an hour reading several things on my phone one day because the seats are that comfortable.

That said, there’s a glaring omission: a massaging driver’s seat. For more than $55K and enough leather on the inside to make cows move away from the side of the road because they fear they could be next, it’s inexcusable. Yes. It’s a first-world problem, but $55K is a first-world price tag. 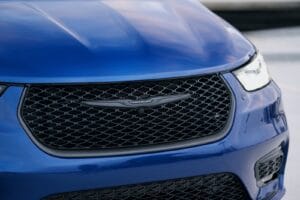 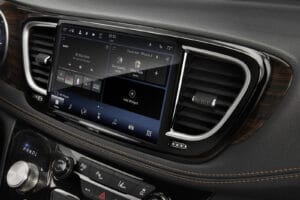 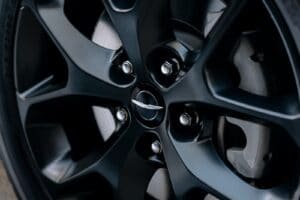 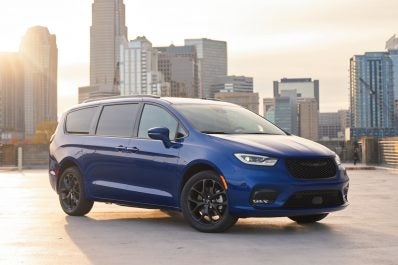