Plug-in model will deliver up to 30 miles on a charge. 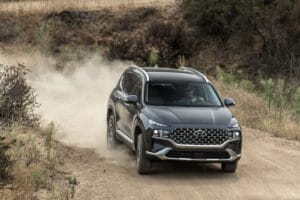 The Hyundai Santa Fe got a major redo for the new model year.

While late to the party with electrified vehicles, Hyundai is racing to catch up with an assortment of new, battery-based  products. For 2021, that includes both a hybrid version of its mainstay SUV but also a first-ever PHEV, the Hyundai Santa Fe Plug-In Hybrid.

The midsize crossover got a major makeover for the current model year. The arrival of the two hybrids gives more alternatives to buyers who want to conserve fuel or even operate entirely on battery power. Many PHEVs now on the market offer such limited range they really don’t offer much benefit. At an EPA-rated 30 miles, however, Hyundai officials claim that’s enough to handle the daily commute for most Americans.

The Santa Fe Hybrid will be the first to market, reaching showrooms this spring. The Plug-In Hybrid will follow over the summer. 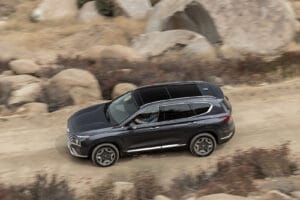 The 2021 Hyundai Santa Fe is designed to be at home on the road or off.

Unlike some competitors, “We’re trying to minimize the difference from the (gas-powered Santa Fe),” said Melvyn Bautista, assistant manager of product planning for the program.

So, the two hybrids feature only the most modest differentiation from the conventionally powered crossover. Not that this is a bad thing.

The 2021 makeover delivered a more striking take on the familiar Santa Fe face. It’s more upright, with a wider and more three-dimensional grille framed by split head and daytime running lights. The side panels are more sculpted than the earlier SUV, with a bit of a coke-bottle curvature and more pronounced flaring over the wheel wells.

The interior, likewise, retains relatively true to the design we first saw with the current gas models. There are new niceties, such as the panoramic roof, and an upgraded infotainment system. The hybrids get a 12.3-inch digital gauge cluster, with an upgraded 10.25-inch touchscreen available atop the center stack. 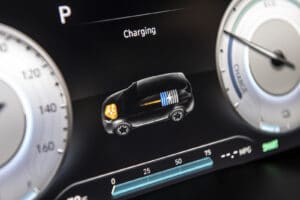 The most notable difference you’ll see with the plug-in is a power meter that replaces the conventional tachometer on the display. Owners also will have the ability to switch operating modes. For one thing, they can reserve battery power for use at a specific time, such as when driving into an urban area. That could prove useful in the future as some cities around the world are considering rules that would ban vehicles not operating in zero-emission mode.

The big difference will be found under the hood where Hyundai starts off with a 177-horsepower 1.6-liter gas engine. The Santa Fe Hybrid adds a 60 hp electric motor that is placed between the engine and a 6-speed automatic transmission, yielding a total 226 peak horsepower. (The number is lower than the math might suggest because each power source peaks at different RPMs.)

It also boasts a 13 kilowatt-hour lithium-ion battery-pack compared to 1.6 kWh in the conventional hybrid. On both models, the packs are liquid cooled and mounted underneath, effectively eliminating any impact on interior cargo and passenger space. 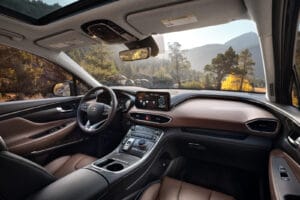 The new Santa Fe hybrid offers plenty of room and comfort for 2021.

They both come standard with Hyundai’s HTRAC AWD system, rather than opting for the through-the-road AWD systems many competitors use. The plug-in version of the Honda CR-V, for example, provides power from its gas engine to one axle, its electric motor to the other. Hyundai’s approach does mean a driveshaft running front to back but it yields more flexibility when directing torque. The system can send as much as 100% of engine power to the front wheels, and up to 50% to those in back.

In terms of fuel economy, the 2021 Hyundai Santa Fe with a base 2.5-liter gas engine yields 24 miles per gallon combined, according to the EPA. That jumps to 34 for the Hybrid and 33 for the heavier PHEV.

Though Hyundai hasn’t revealed pricing for the two hybrids yet, the plug-in is expected to start around $35,000. That would be about $7,000 more than a base Santa Fe – though you’d get a lot more content, beyond the benefits of a PHEV.

Whether American motorists will care about improved fuel economy is uncertain. So far, plug-in hybrids haven’t set the market on fire. But Hyundai believes it has several big selling points.

The plug-in’s added power is one advantage, coming up just short of what the Santa Fe gets with its turbo-engine option, at 277 hp. The other plus, Hyundai claims, is the ability to run for up to 30 miles on pure electric power. While that’s a fraction of what you can get from the latest generation of battery-electric vehicles — like the 258-mile Hyundai Kona — it comes in around what the typical U.S. motorist drives every day. Plug it in before bedtime and you could go for days, weeks, even months, without firing up that 1.6-liter gas engine.

On the other hand, it’s there when you need it for a long trip, eliminating dreaded range anxiety.