Cummins, Navistar to Team Up on Fuel-Cell Truck Development

Companies get $7M DOE grant to help fund the project. 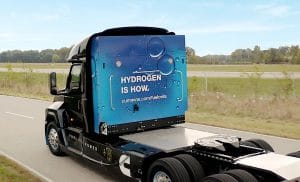 The two companies said in a press release this week the project will financed, in part, with a $7 million grant from the U.S. Department of Energy’s “H2@Scale” initiative to develop affordable hydrogen production, storage, distribution and use.

“This vehicle will feature our next generation fuel cell configuration and provides a springboard for us to advance our hydrogen technology for line haul trucks,” said Amy Davis, vice president, and president, New Power at Cummins. Putting fuel cells in commercial trucks is considered the first step towards broader use of the technology in motor vehicles.

The joint effort by the two companies also brings into sharper focus the expanding race among competing groups to develop a commercially viable fuel cell for use in freight hauling. Daimler and Volvo Trucks also are working on vehicles powered by fuel cells. 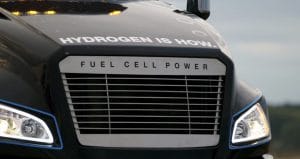 Cummins has been developing a fuel cell for use in Class 8 trucks.

Last week, Navistar signed a definitive merger agreement with Traton, formerly the Volkswagen Truck and Bus Group. The deal is scheduled to close in the middle of next year. Cummins, meanwhile, has also been working with Hyundai on fuel-cell development.

“We are also excited to build on our strong relationship with Navistar, which dates back 80 years, and work together to lower costs and make hydrogen-powered vehicles more accessible for fleets to adopt,” Adams said.

Through the H2@Scale program, the DOE is assisting in the development of an integrated fuel cell-electric powertrain for heavy-duty trucks that could assist with the rapid, and substantial penetration of the truck markets.

The projects objective is to development of a solution that is highly manufacturable and scalable with a proven range of 300 miles or more and improved fuel economy compared with current heavy-duty trucks, Cummins said.

The two will conduct real world tests of a prototype fuel cell-powered Class 8 truck with Fontana, California-based Werner Enterprises, which operates a fleet of more than 7,700 tractors, putting the rig through its paces for at least a year, the companies noted.

Last year, Cummins Inc. unveiled a heavy-duty truck equipped with fuel-cell and battery-electric power and executives have said at the time strategy for the company is to provide customers in the future with a broad portfolio of power options, from diesel and natural gas, hybrids, to battery electric and hydrogen fuel-cell solutions.

“Developing this cutting edge hydrogen fuel-cell truck as a technology demonstrator is an important step in gaining valuable insights that are critical to continue developing the right solutions for the market and preparing for the next 100 years.” said Thad Ewald, vice president, Corporate Strategy at Cummins and leader of the company’s Electrified Power business.