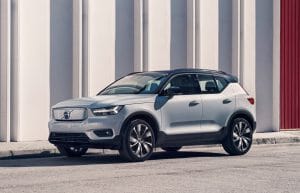 Volvo is planning to offer BEV versions of its line-up, starting with the all-electric XC40 Recharge P8.

Volvo was one of the first European automakers to seriously embrace electrification, creating quite a stir when it announced its most powerful engines would be plug-in hybrids, rather than turbocharged sixes and eights. Now, it is making the move to all-electric propulsion. And while the Polestar brand-within-a-brand is taking the lead here, Volvo itself plans a broad range of all-electric models, starting with this month’s launch of the XC40 Recharge.

Eventually, we can expect an array of all-electric Volvos, the automaker’s CEO last week confirming plans to launch a smaller XC20 model, with bigger BEVs coming, as well. By 2025, in fact, the automaker wants those all-electric models to account for fully 50% of its global sales.

I had a chance to put the compact battery-electric vehicle through its paces as part of my role as a juror for the North American Car and Truck of the Year competition. While we plan to have a more extensive review up in the months to come, here are my initial impressions. 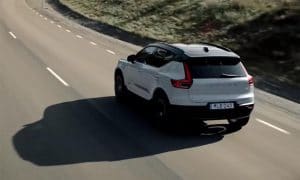 Overview: The first pure battery-electric vehicle, the XC40 Recharge is simply a battery-powered version of the existing XC40 crossover – which has been offered with a mix of powertrain options including the brand’s plug-in hybrid “twin engine.” But instead of a fuel filler door, the giveaway is a charging port.

All versions of the XC40 are based on the same CMA, or compact modular architecture, a flexible platform used for several other Volvo product lines.

Here, the internal combustion engine has been replaced by twin electric motors, one driving each axle. The 78 kilowatt-hour battery pack, meanwhile, has been mounted beneath the load floor both to minimize intrusion into the passenger compartment and to lower the vehicle’s overall center of gravity.

“… All told, the 402-horsepower drivetrain is as spritely as anything Volvo has ever offered, though the battery pack is a bit small by comparison to some competing products, limiting the XC40 Recharge’s driving range ….” 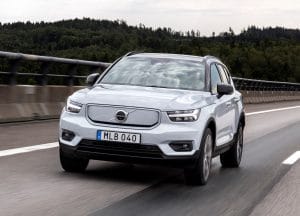 powered models, it has what the automaker likes to call a “bulldog stance,” with a strong, upright nose and the now signature Volvo “Thor’s Hammer” headlamps. They frame the most telling detail, the Recharge abandoning the familiar XC40 grille in favor of a solid panel, as electric vehicle’s need far less cooling airflow under the hood.

This more aerodynamic approach is capped by an oversize Volvo “iron mark” badge that conceals various sensors for the car’s advanced driver assistance systems. Other details unique to the XC40 Recharge include a gloss black roof and mirror caps, distinctive Recharge badging and more aero-friendly 19- and 20-inch wheels. From the rear you’ll note a new diffuser – and the obvious lack of exhaust pipes.

Interior: The cabin is largely the same as the standard-issue Volvo XC40, with a Swedish minimalist take on luxury appointments. The large, vertically oriented touchscreen dominates the instrument panel – but more on that to follow.

Depending upon the trim level, one can get classic wood inlays or more modern metallic detailing. The XC40’s adjustable ambient lighting adds a nice, elegant touch while driving at night. 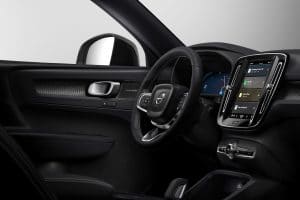 As attractive as the interior might be, what buyers and passengers are likely to really appreciate is the roominess of the cabin which offers plenty of headroom and a reasonable amount of legroom. There’s also a substantial amount of cargo space, especially once the rear seats are folded down. The XC40 Recharge also offers the advantage of having a modest-sized “frunk,” or front-mounted trunk,” where the internal combustion engine normally would be located. It’s big enough to handle a large day bag, even a smaller weekender, or a few days of groceries.

EVs can’t draw heat from their engine, of course, unlike a vehicle with an internal combustion engine. As with many of the latest BEVs, meanwhile, Volvo has switched to a heat pump system for cabin climate conditioning, a system more efficient than traditional electric heaters.

Powertrain: The Recharge pairs two motors, one on each axle, to produce 402 horsepower. But what might be the more important figure is the 486 pound-feet of torque they produce. With a single speed transmission, power comes on all but instantaneously. Torque is equally split between front and rear, creating a through-the-road all-wheel-drive system. 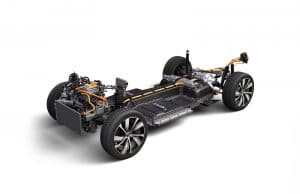 Volvo XC40 Recharge powertrain will get batteries built at the Ghent, Belgium plant.

As is the norm, the XC40 Recharge features a blended braking system that combines conventional friction brakes and a regenerative system that captures energy normally lost when slowing down, sending it back to the battery to enhance range.

The Recharge model also features the capability of one-pedal driving. Switch it on via the settings menu and it will feel almost like you’ve downshifter several gears. In many cases, you can simply ease off on the throttle without having to jump to the brake to slow and even come to a stop.

The crossover features a 78 kWh lithium-ion pack – of which 75 kWh can be accessed. The pack can be recharged using an 11 kilowatt onboard charger that, with a 220-volt source will top you off in just 8 hours.

Technology and Safety: The 2021 Volvo XC40 Recharge is loaded with digital comfort and safety technologies, starting with the 12.3-inch reconfigurable gauge cluster. Then there’s the updated version of the Swedish marque’s familiar touchscreen infotainment system. The tiled layout allows you to quickly access a variety of different features, such as phone, navigation, audio and climate control, without having to switch from screen to screen. 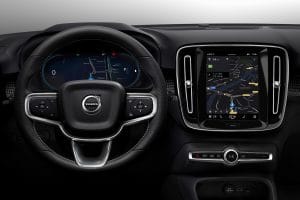 Significantly, Volvo has moved from its own Sensus software to the Android Automotive OS which I found found more effective. It now integrates both Google Maps and the Google Assistant voice controller which is much more effective at recognizing everyday speech. There are also unique functions meant to assist EV drivers, helping you not only find public charging stations but also plotting a route using the navi system that will help you figure out when and where to charge along the way, if need be.

This is, of course, a Volvo, so there’s a long list of ADAS, or smart safety gear, such as forward collision warning with pedestrian detection and automated braking, blind spot detection, rear cross-traffic alert and more.

One other key feature is the addition of smartphone-like over-the-air, or OTA, updates which will let Volvo update maps, add or revise onboard features and even update vehicle software, if need be, to address possible problems.

Drive Impressions: Operating the Recharge is a bit different than a conventional XC40. You realize that immediately when you slide behind the wheel and discover there is no start button. If you’ve got the key, all you need do is step on the brake and slip the shifter into gear. 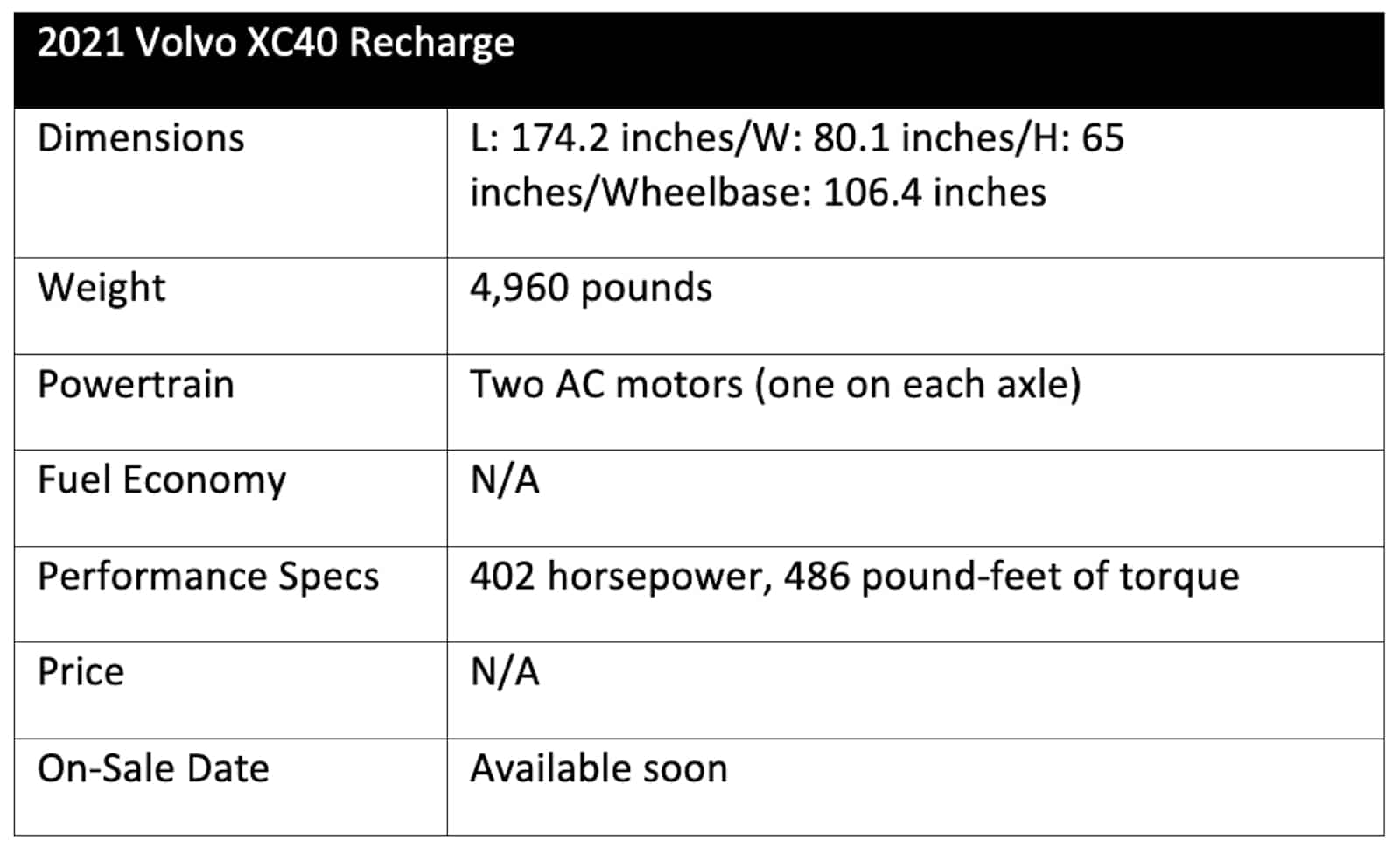 The next shock came as I pulled out of the parking lot and slammed the throttle to the floor. The XC40 shot forward like a startled cat, quick enough to snap my neck back and give me the sort of rush you’d normally only expect from the fastest of sports cars. Unlike some EVs, this high-torque takeoff wasn’t limited to launch. Even at 60 mph, you got rocket-like acceleration for passing maneuvers or when rolling onto a freeway.

By positioning the batteries down low, meanwhile, the Recharge might be heavier than other versions of the XC40 but also has a lower center of gravity which becomes apparent when you flog it around corners. No, it isn’t a sports car, but it does deliver a very sporty overall ride feel with good steering feedback and a suspension that overcomes the heaviness you experience with some BEVs.

If there’s one disappointing detail it’s range, the EPA estimating you’ll get a modest 208 miles per charge. That’s double what first-generation EVs delivered and will readily handle most day-to-day duties for the sort of buyers Volvo expects, but it is no comparison to what a similarly sized Tesla Model Y will yield, nor up to what many competitors are now achieving, from 250 to more than 300 miles. This is likely to limit demand outside urban and coastal markets where public charging stations remain relatively few and far between.

Wrap Up: The issue of range is likely to be an influential factor for many potential buyers, which is too bad. On the whole, there is a lot to like, and even love, about the 2021 Volvo XC40 Recharge. It’s an attractive vehicle, inside and out. It has plenty of passenger and cargo space and its performance is nothing short of thrilling. As with all of today’s BEVs, there is what you might call a “battery premium,” but the price tag shouldn’t shock many of those already considering an XC40. If its range isn’t a problem and you’re looking seriously at an all-electric vehicle, the 2021 Recharge should be on your consideration list. 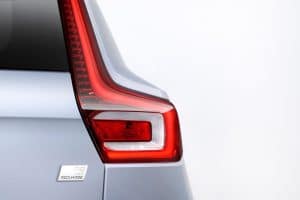 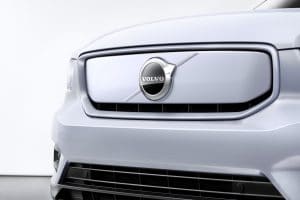 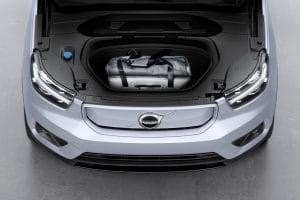