One of the market’s roomiest SUVs gets even roomier -- and more mannered. 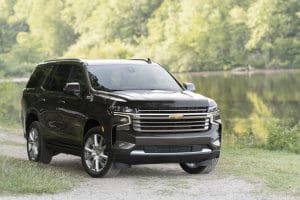 The Chevy Tahoe High Country hits the road 7 inches longer than its predecessor.

Parked in my driveway alongside a compact sport-utility vehicle I was also driving a few weeks back, the sheer mass of the new 2021 Chevrolet Tahoe was hard to miss. In fact, the completely updated model is nearly 7 inches longer than the old Tahoe. In today’s SUV-centric world, this is about as big as you can get, with the exception of the also-new Chevy Suburban.

Overview: Kudos to the design team that pulled the new Tahoe together. It easily could have looked like a bus, big and bloated. While there’s no escaping its size, the look of the 2021 makeover is attractive yet bold. The added dimensions, meanwhile, translate into a much roomier interior that can handle up to nine people in surprising comfort – especially if you opt for the Tahoe High Country we got to drive recently.

It’s not cheap, at around $80,000 with all the standard and optional features on the top-of-the-line model we tested. But the Tahoe High Country, the Chevrolet answer to GMC’s Denali, is a lavishly equipped cruiser that would be a joy to drive, whether hustling the kids around town or taking it out on a long vacation trip. And it’s not only got plenty of room for passengers and cargo but the muscle to haul a hefty boat or RV. 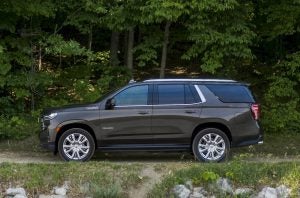 The new Tahoe is longer overall and sports a longer wheelbase as a result, offering a little more interior room.

Size alone is just part of the story for 2021, however, the latest-generation Chevrolet Tahoe also migrates to an independent rear suspension, a shift that translates into a better ride – and a yet roomier interior and cargo bay. Meanwhile, among the numerous engine options now available, the new ute finally will get a diesel, though it will come later in the 2021 model year.

Exterior: At 6.7 inches longer than the outgoing SUV – its wheelbase growing by 4.9 inches — you might almost confuse the new Tahoe with the old Chevrolet Suburban – which is itself stretched a fair bit for 2021.

… The updated design is not going to come as a major surprise. You’ll immediately recognize this as a Tahoe …

While retaining the general look, it has a more modern, less utilitarian feel, overall. The bigger grille is framed by smaller, almost slit-like headlamps that flow into the front fenders. There’s a subtle slope to the roofline, and the huge rear doors all but boast about the space you’ll find inside. 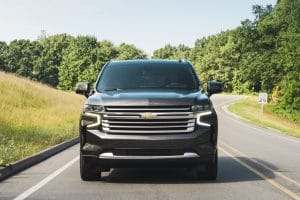 The front end of the new model features a larger grille with smaller, slit-like headlamps.

Interior: As is obvious, when you stretch out a vehicle like Tahoe by more than half a foot, you’re going to see a big increase in passenger and cargo space. But Chevy went further, the switch to an independent rear suspension further enhancing the overall roominess, among other things lowering the load floor by a full 5.3 inches and delivering a massive increase in cargo capacity.

In terms of seating, an NBA player would have no trouble sliding in up front and probably in the second row, as well, especially as it now offers slide and tilt. Even the third row is no longer a penalty box, head, shoulder and legroom about the same as in the Chevy Suburban.

Cargo space has grown from 15.3 cubic feet to 25.5 with the new model, and that’s just behind the third row. With all seats folded, it jumps to an amazing 122.9 cf – enough that one Chevrolet engineer, during a recent webinar, noted how he was able to haul a refrigerator to his mother’s house without having to leave open the tailgate. 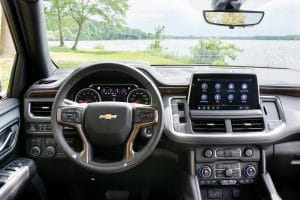 The interior of the new Tahoe has many of the luxury amenities one would expect on a pricier SUV.

Our test vehicle, the Tahoe High Country, complemented all that space with the sort of luxury amenities you’d normally expect on a luxury vehicle. Features included a panoramic sun roof, upgraded leather seating, power running boards and a useful sliding center console. The one surprise: the lack of real wood.

Powertrain: The 2021 Chevrolet Tahoe offers a seemingly endless list of options, and that includes what you want under the hood.

For those who want maximum towing capacity, as well as the best fuel economy, you might want to wait until the diesel arrives later this model year. It’s expected to deliver about 700 miles of range, letting you drive virtually the full length of the California coast non-stop – were your bladder to hold out.

The High Country we tested featured a 6.2-liter V-8 making 420 horsepower and 460 pound-feet of torque. It boasted the near-max towing capacity for the new Tahoe line at 8,100 pounds. If there’s a downside, it’s fuel economy which, at 14 mpg City, 19 Highway and 16 Combined isn’t especially impressive – all the more so because it requires premium gas to meet the rated power numbers. By comparison, the similarly sized Ford Expedition runs on regular. 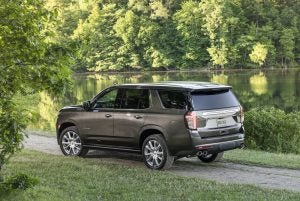 The new powerplant for the 2021 Tahoe puts out 420 horsepower and 460 pound-feet of torque.

Technology and Safety: Tahoe now offers six trim levels, so what you get will vary significantly from model to model. Standard equipment on the High Country was significant, but there are still a number of options to tick when ordering.

As delivered, our Tahoe had lots to impress a techie, including its 10.2-inch touchscreen display, the latest Chevy infotainment package, with a reasonably effective voice recognition system, the new wireless versions of Apple CarPlay and Android Auto, a head-up display and active cruise control.

… kudos to Chevy for retaining climate and audio buttons and knobs …

When you’re talking about a vehicle like Tahoe, buyers want more practical technology, as well. And that includes niceties like the power running boards, hill descent control and a trailering kit that helps keep a boat or RV stable on the highway, as well as easing the process of hitching up and parking. We also had an active suspension and two-speed transfer case to enhance off-roading. 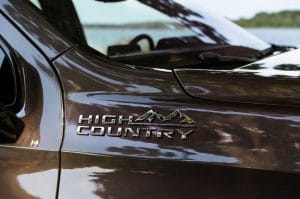 The new Tahoe comes in five trim levels, including its highest, the High Country.

The High Country also added a multi-camera monitoring system, similar to what we first saw on the latest-generation Silverado pickup. It lets a motorist choose from a variety of different angles and views.

Some of these features provide a major enhancement to safety, especially when trailering. Other advanced driver assistance systems include forward collision warning with pedestrian alert and both front and rear auto-braking, lane change alert, blind-spot warning and cross-traffic alert.

Drive Impressions: Unfortunately, due to the pandemic, Chevy couldn’t stage the originally planned media driving event, limiting our ability to pull a trailer or go off-road. That said, we clocked plenty of miles on local roads to get a good feel for how the 2021 Tahoe performed in normal, day-to-day operation. The good news is that it delivers a big improvement compared with the outgoing model.

Much of the credit goes to the new independent rear suspension, though the active air suspension on our tester was another plus. The big ute swallowed up all but the roughest bumps, including those we normally suffer through on I-75, a freeway undergoing major construction. There was far less side-t 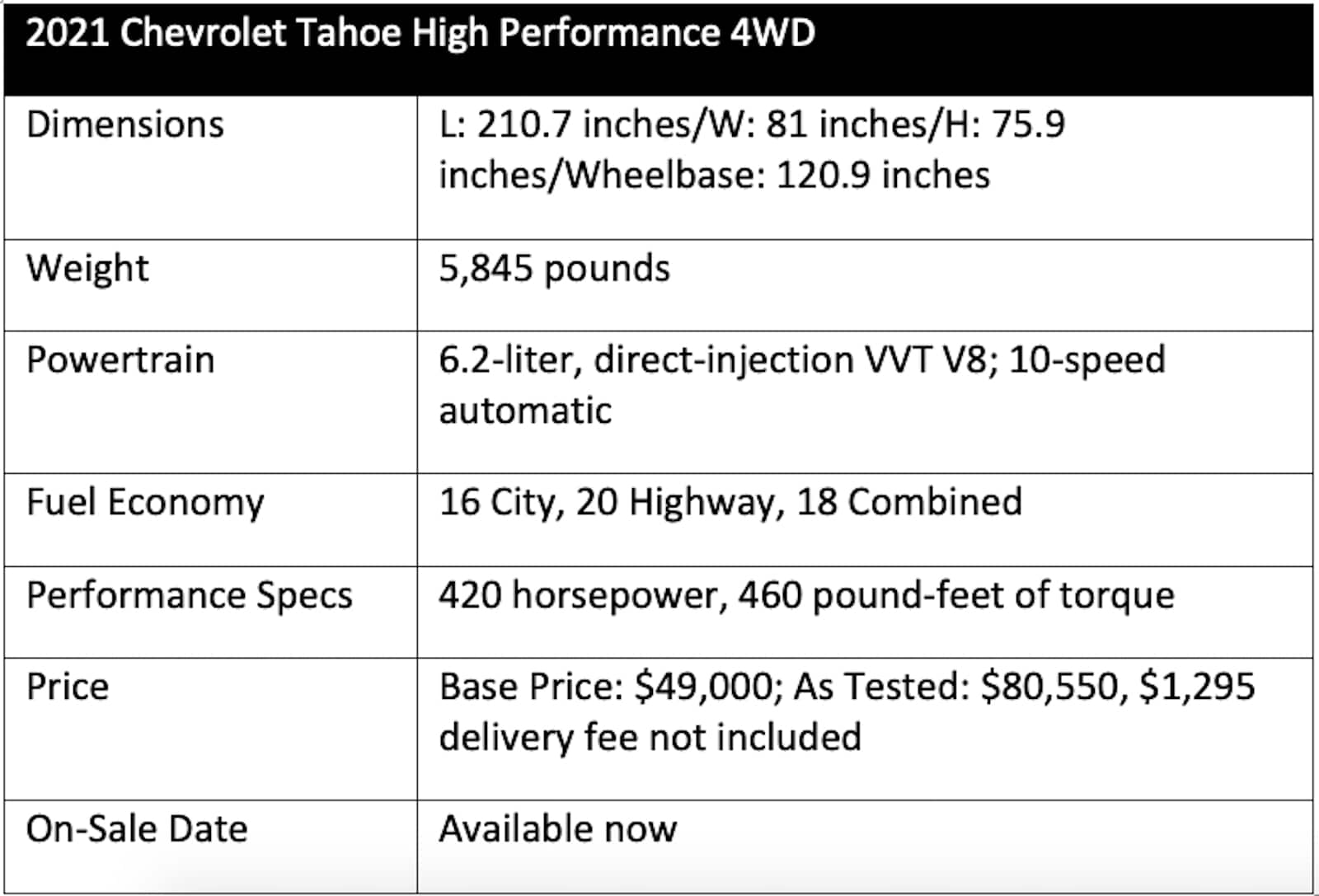 o-side pitch than you’d expect on a big bruiser like this, and it remained nicely composed when launching into sharp corners. No, it’s not a sports car, but the 2021 makeover offers a far nicer driving experience than past versions of the Tahoe.

We’re looking forward to driving a Tahoe with a steel suspension in the near future, but that air suspension is a real plus, among other things adjusting height when parked, switching to off-road mode or on the highway.

The big engine provided lots of power off the line and made high-speed passes effortless. Perhaps the most appealing part of the drivetrain, however, is the GM 10-speed automatic which shifted all but transparently and always landed in the right gear with a minimum of hunting and seeking.

Wrap Up: Ford upped the game when it did a big makeover of the Expedition a year back, so GM had a big target it had to aim for. 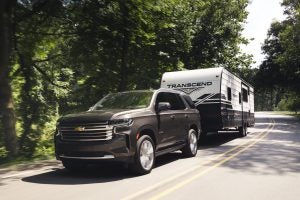 The new Tahoe offers a impressive mix of utility and comfort, which more consumers are looking for these days.

Based on our first drive of the 2021 Chevrolet Tahoe, they’ve gotten into the bullseye, if not absolutely dead center. The big Chevy ute, especially the top-line High Country, has plenty going for it, short of better fuel economy and some real wood trim.

The good news is that those who need a full-size SUV like Tahoe have a variety of options to choose from, the base trim starting around $49,000. Going up to the High Country model doesn’t come cheap and we expect the roughly $80,000 for our loaded-up version is in line with what other buyers will pay.

The Chevy Tahoe has been the number-one vehicle in its segment for 19 of the past 25 years and, based on our time in the 2021 model, we expect it will continue to dominate going forward.