It lives up to the billing — all of it. 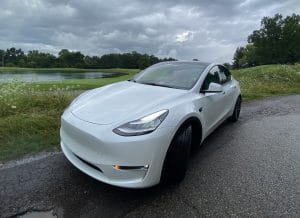 To say that Tesla’s been turning the industry on its ear for the past 18 months might be an understatement. It’s Model 3 sedan has been nothing short of a success and the new Model Y seems to be following it its footsteps.

Of course, this makes sense since the two vehicles share well over 75% of their parts. And while the Model 3 was a much-anticipated release, the hype surrounding the Model Y was even greater as fans and critics alike waited to see if Tesla could do it again.

Overview: Well, after a brief run in the new Model Y, we can say – with apologies to Britney Spears, the California-based EV maker did it again. The new Model Y is expected to be the company’s best-selling vehicle, and on the surface one can see why. 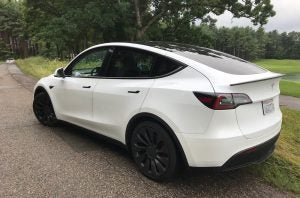 The Tesla Model Y shares more than three quarters of its parts with the Model 3.

The midsize SUV takes all of the best parts of its Model 3 sibling and then puts into the most popular type of vehicle – a sport-utility vehicle – in the U.S. right now. If there was ever a formula for success, that may be it. However, the company, which introduced the new ute several months before CEO Elon Musk’s predicted debut date, has been plagued with several quality issues. Tesla fans often dismiss those issues while auto enthusiasts are thoroughly irritated by them — an issue for later in this piece.

Exterior: While we’re a big fan of the Model 3’s exterior styling that warm, fuzzy feeling doesn’t exactly roll over to the Model Y.

… it’s a much more attractive vehicle in person than what you see on the internet. It’s really does take the best parts of its sedan sibling into its design …

While it’s an attractive vehicle, it’s not the standout design in its segment. When you walk up on it in Pearl White, it definitely gives it a boost. The Performance version we drove comes with 21-inch wheels that give it an aggressive, sporty look that complements its overall shape. 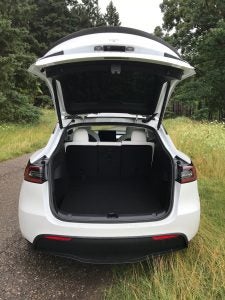 The Model Y offers plenty of cargo space in the five-seat configuration.

However, if you’re looking at the exterior of the Model Y, you have to address one of the biggest problems that appears to plague the new SUV: panel gaps. While a quick search of the internet will reveal stories ranging from perfection to OMG What Did I Buy, our tester had just one: on the driver’s side where the hatch and roof meet, it was noticeably wider than the same gap on the passenger side.

Additionally, the small carbon fiber-looking spoiler on the hatch felt like it could be pulled off easily after we rested our hand on it while talking, but you wouldn’t see that from afar. We have to say, that there were any issues at all on a vehicle at a service center was surprising — not alarming, but surprising.

Interior: We are a fan of simple, Nordic (read Volvo, Ikea) style interiors, whether is cars or homes. The interior of the Model Y – as is the case with the Model 3 – puts us in our happy place. Well, at first anyway. The vehicle we drove came with the white interior which just stunning. It’s fresh take on the blindingly white interiors of big, hulking cars of the past — or the not-so-old-but-not-built-any-more Lincoln MKS.

The seats are slim, yet elegant looking and very comfortable. We would have no problem sitting in them for a long drive. The 15-inch touchscreen in the center of the dash that controls every feature except the power windows, is clean and responsive with a picture that is stunningly clear. 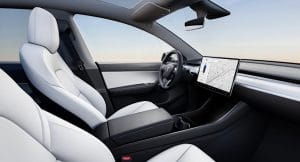 Now we know why it’s like that and we’re certain that, for the most part, that desire to yell at the screen because we’re used to simply reaching over with our left hand to adjust the mirrors instead of feeling like you’re trying use an atm to do so would go away.

Powertrain: The Performance model comes with a dual-motor, all-wheel drive set up that makes certain that you have power and control. It has a range of 291 miles, which is less than the 316 from the Long-Range model. However, you can get half of (158 miles) back in less than 15 minutes using a Tesla Supercharger. Using the braking regen will help you offset some of those lost miles as well. It will hurtle you from zero to 60 mph in just 3.5 seconds and boasts a top speed of 155 mph.

Simply put: It’s fast. Really. Really. Fast. Who cares about how far it goes on a charge. Put your foot into it and you won’t remember anything about battery range or anything like that.

Technology & Safety: We’re going to take these in reverse order. Say what you will, Musk and the gang in Fremont build an extremely safe car. It gets stellar numbers on crash test ratings because it’s designed to do so. It does have a problem with fires, but that’s a battery issue that the company has a 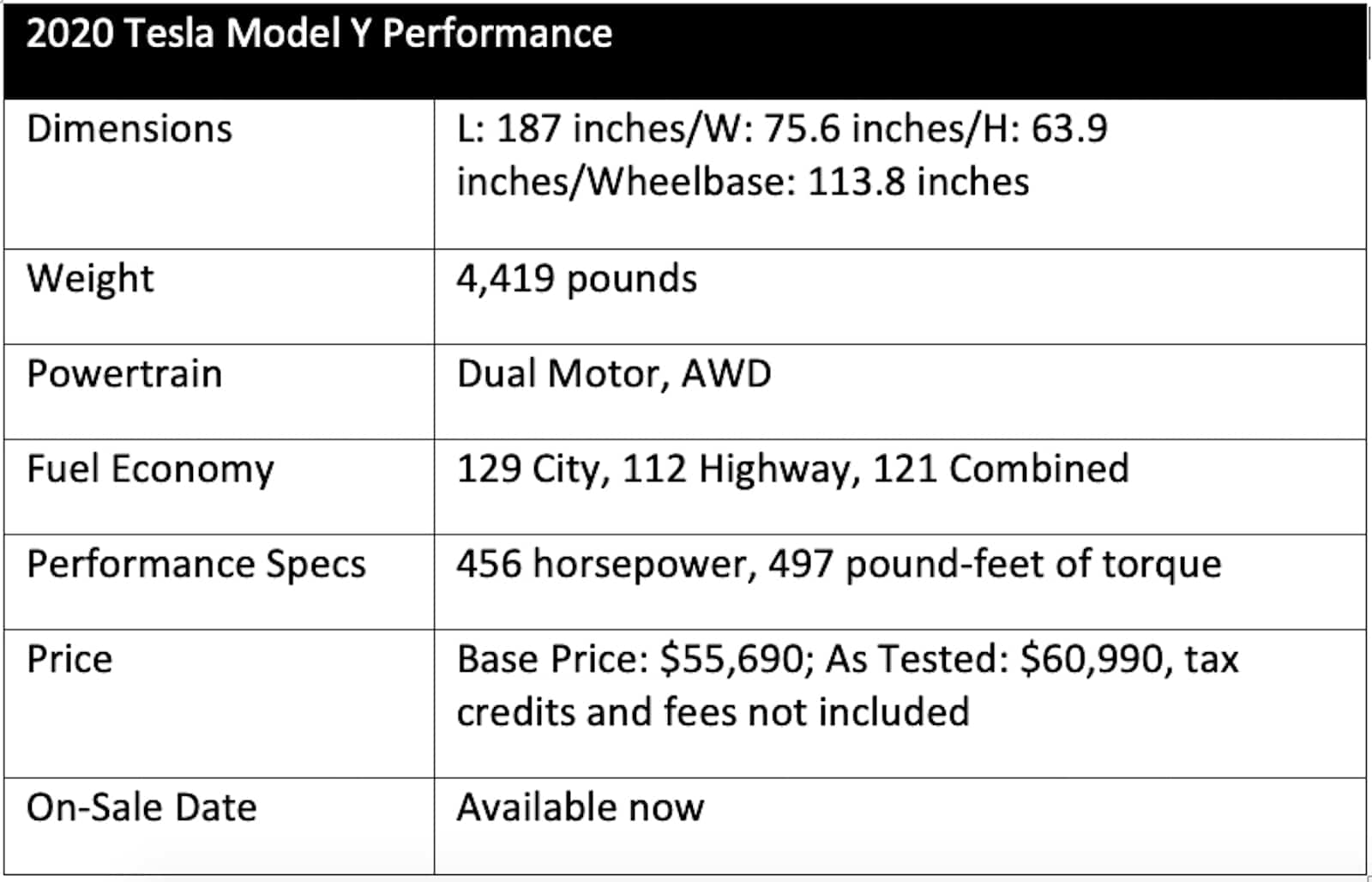 ddressed by reinforcing those parts of the vehicle and the number of incidents has dropped dramatically.

The technology, which also plays a role in the safety of the vehicle, is too overwhelming to ignore. It begins before you even get to the vehicle. You use the Tesla app on your phone to unlock the car. It also recognizes it’s you, so it configures the vehicle to your settings for seats, climate controls, radio controls, etc.

Naturally, the aforementioned touchscreen runs everything in the car, which has its shortcomings, but its bonuses as well. The cameras on the car needed for Autopilot, and eventually full self driving, right now offer an impressive array of angles to help you with parking or commuting — and the images are sharp and clear.

… We won’t say we got too comfortable with (Autopilot), but we did get settled enough that we almost forgot to take over to make a left turn on to a street that was part of our programmed route. So, we were “disappointed” because we wanted more …

Yes, yes. I know. Autopilot. Well, we’d say it’s disappointing. It does what it supposed to do. and we were pleased by that. It kept the car in its lane very well. It stopped when it was supposed to stop. Pulling away from a stop was smooth and consistent. The disappointing part? We became very comfortable with it very quickly and expected it to do things it can’t do yet, like make 90-degree turns. 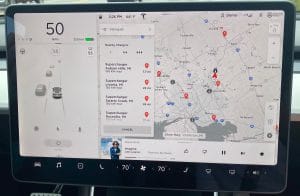 Tesla makes it easy to find a Supercharger with its navigation screen.

Driving Impressions: Did we mention its fast? It’s really, really fast? Not only is it fast, but with the all-wheel drive, the various techno nannies that come with the ute and its structure, the Model Y handles extremely well. We put our model through its paces on some winding roads in northern Oakland County and it soaked up small bumps, and turns we met with little body roll and there was not any noticeable over or understeer.

We’re a fan of the multiple settings on the braking regeneration. It was easy to adapt to and basically eliminated the need for braking during our test run. Also, the visibility was very good for a small utility vehicle, and it can be aided in some circumstances by the various cameras.

If you add in the comfortable seating, the Model Y is an excellent place to be. For a base price of $55,690 and an as-tested price of $60,990, that should be the minimum requirement.

Wrap Up: The current iteration of the Model Y is pretty much all that you hear about it: fast with lots of technology and some quality issues. In most cases, that would be cause for concern for the automaker and potential buyers. 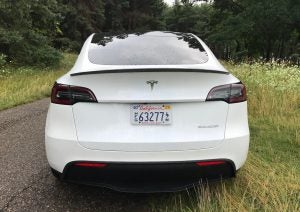 The Model Y looks better in live and in person than it does in pictures.

However, Model Y (and Tesla, in general) buyers aren’t your typical auto consumer. They see the flaws but accentuate the positive. In part, because they share Musk’s view of what we don’t get right today, we can fix tomorrow. We can see how they get there because driving the Model Y – the first time anyway – is an experience.

Based on the reactions of others, that doesn’t seem to fade away much. However, when it does, Elon sends out an over-the-air-update that upgrades your battery’s range or adds Hulu and Netflix to your system or upgrades the Autopilot program. This means that the vehicle they drove home from the factory with won’t be the same one in two years — it’ll be better. And that you don’t get with anyone else.