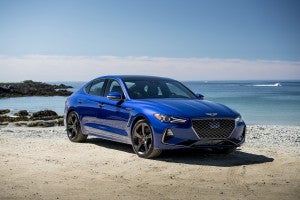 The Genesis G70’s exterior styling and performance make it a standout in its segment.

At a time when mobility has become a buzzword for the future of transportation, passenger cars –sedans, coupes and convertibles – still retain a huge space at the heart of the world’s automotive culture as carmakers compete for buyers around the world.

Thus it ought to come as no surprise that Genesis, the luxury brand from Hyundai, has ventured to create an identity built around sleek, well-equipped and well-honed passenger cars such as the G70, the rear-wheel-drive sedan that we had the opportunity to drive recently.

Overview: The G70, however, is more than a knockoff of an expensive European passenger car from brands such Audi, BMW, Jaguar, Alfa Romeo and BMW. Nor is it a copy of an American muscle car. Instead, the G70 has its own presence and style that fits well with contemporary trends for tasteful elegance and seeks to avoid any notion of ostentation. 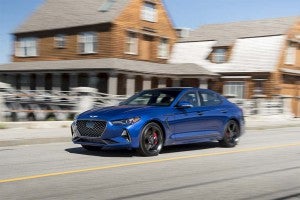 With a low-slung silhouette the G70 is a dynamic-looking sports sedan.

Exterior: One of the first things you notice walking up to the G70 is its height or lack of height really. It’s only 55 inches tall, which brings it closer to the drive than the typical vehicle on the market today. But the low-slung appearance is one the features that makes the silhouette so appealing and more than a copy of a European sedan.

The G70’s rear-wheel-drive platform also delivers a nice balance to the car and with its long hood, short-front overhang and long roofline the car enjoys classical proportions favored by automotive purists. Genesis designers also dressed up the car’s corners with elements, such as multi-spoke alloy wheels, to form a sleek, dynamic profile. Dark chrome aero trim as well as LED lights and a prominent grille with an expansive air intake enhance the presentation. The hockey stick daylight opening and parabolic sidelines further express the unique design signatures of Genesis, displaying fast and dramatic energy with voluptuous forms and smooth surfaces.

… The result is an exterior appearance that combines elegance and grace …

Interior: One of the places where the G70 shows its South Korean influence is the interior, which blends simplicity and craftsmanship into a comfortable cabin with easy-to-use and easy-to-view controls and gauges. The layout of the control and the 8-inch screen for entertainment and navigation 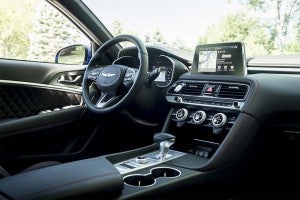 he interior, which blends simplicity and craftsmanship into a comfortable cabin with easy-to-use and easy-to-view controls and gauges.

was clever since it appeared to sit on shelf that also brought controls such as tuning knob closer to the driver should they want to use it.

The stitching across the dashboard gives the interior a handcrafted feel. The stitching on the leather inner door panel with its soft touch and quilted design is particularly impressive. The quilted design is carried over onto the seats of G70. It nicely sets off the first-rate materials throughout the cabin, including aluminum door handles, metal speakers and soft touch surfaces that combine to create an appearance and feel of luxury. Visibility from the driver’s seat also is excellent.

Powertrain: The power in the version of the Genesis G70 that we drove came from a 2.0-liter, inline four-cylinder engine that was matched up to an 8-speed automatic transmission. The engine was capable of producing 252 horsepower as well as 260 foot-pounds of torque. The combined fuel-economy rating was 25 miles per gallon as calculated the U.S. Environmental Protection Agency testing. 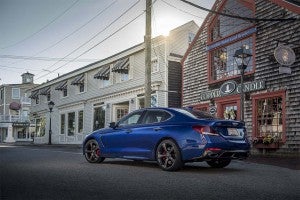 The G70 isn’t just a downsized version of other Genesis sedans, but features its own look.

The shifts were smooth and quick in almost all circumstances, but I did detect what seemed to be a slight lag while hitting the accelerator to pass another vehicle. That was the downside. On the positive, the response when it came was exhilarating. The G70 we drove wasn’t equipped with all-wheel drive, but it does have an excellent stability control system to help keep it on the straight and narrow.

Safety and Technology: Genesis has loaded the 2020 G70 with some of the latest technology and safety equipment as well as connectivity features such as Bluetooth. Advanced driver-assist systems such as Forward Collision-Avoidance Assist, Highway Driving Assist, Blind spot Collision Warning and Driver Awareness Warning have been added as part of the Genesis Active Safety Control suite to offer greater assurance of safety for both the driver and passengers.

The 8-inch touch screen display supporting MirrorLink, Apple CarPlay and Android Auto. There also is a link to Sirius XM and an onboard navigation system that is easy to read at night. 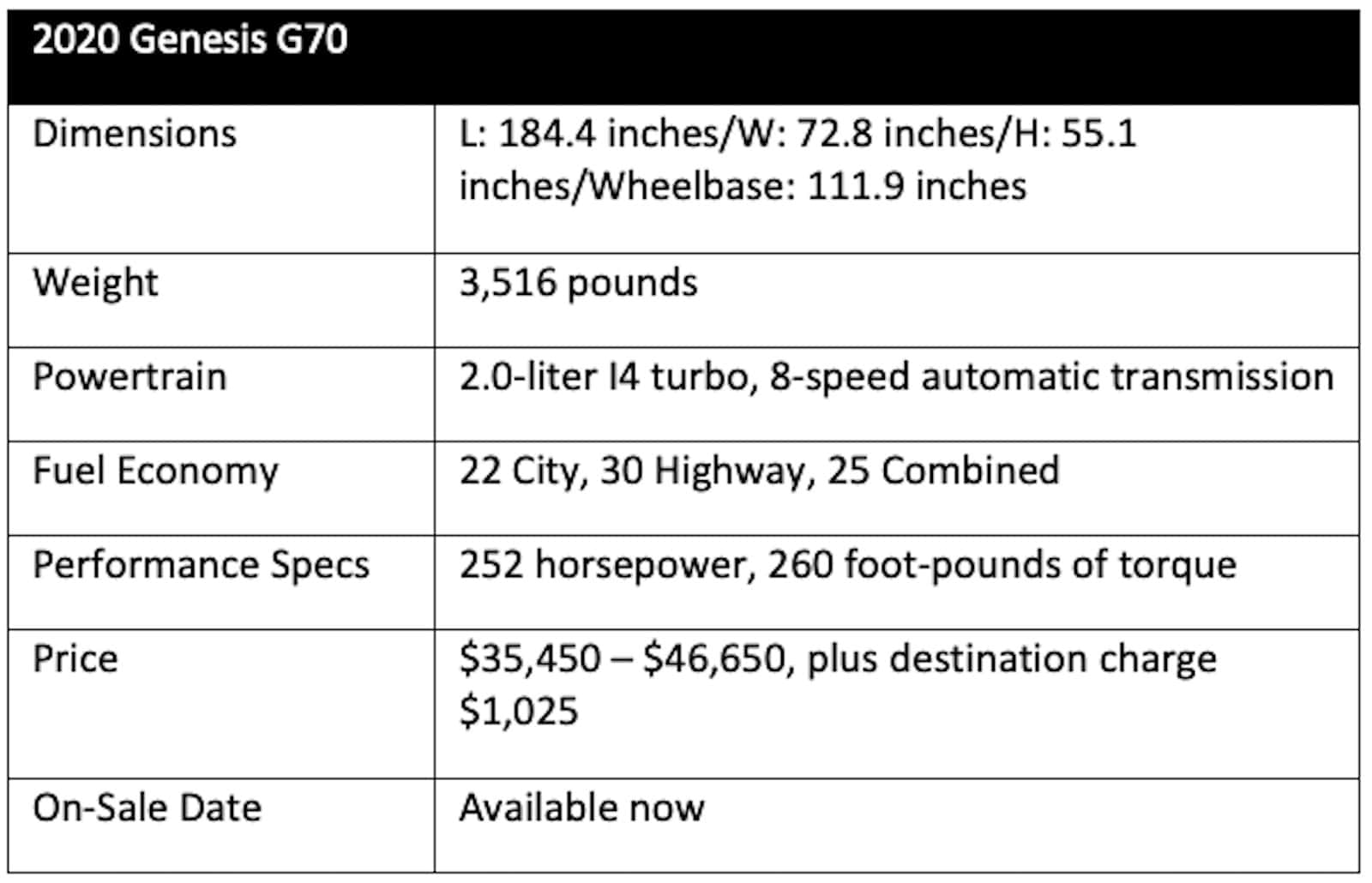 Driving Impressions: One of the most impressive features about the Genesis G70 was the driving dynamics. In recent years, the suspensions built by Hyundai, Genesis’ parent company, have come in for criticism. But the suspension of the 2020 G70 had no problems. It was clearly set up to manage the challenge of varied road surfaces as we drove it around Detroit.

The even on a long stretch of freeway where the pavement seemed have buckled a bit in the heat wave that settled in here during early July, the car managed it without a hitch.

It was also responsive at varying speeds and under different road conditions, and the brakes were excellent.

Wrap Up: All things considered, the Genesis G70, with its long, low-slung silhouette, is the kind of car you can fall in love with at a glance. The car’s classic lines draw you to it and looks good standing a curb or in traffic, judging from the glances the car got in traffic.

The one thing we found disconcerting was the tire noise that penetrated the cabin during freeway driving on a very, very hot day, which seemed to expose a gap in the sound deadening insulation underneath the cabin. Nonetheless, the car was an enormous pleasure to drive and measured up well against more expensive models from European carmakers. Overall, the Genesis G70 serves as a vivid reminder of the broad appeal of passenger cars. 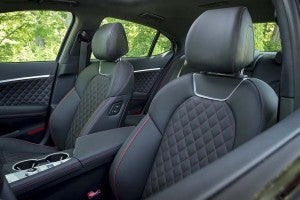 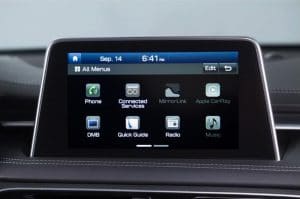